* PSG on the lookout for Pogba 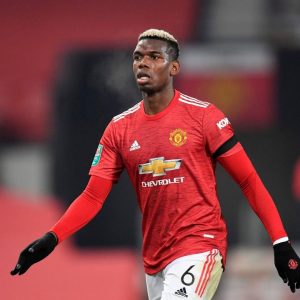 Manchester United are under pressure to sell Paul Pogba in the next six weeks. It’s understood that Pogba’s agent Mino Raiola is discussing personal terms with PSG, who believe they can sign the 28-year-old midfielder for less than half the £ 89 million (Rs. 24.2 b) he cost United in 2016.

Pogba has a year left on his £ 290,000-a-week (Rs. 78.8 m) contract and has given no indication that he is interested in signing a new one. He is regularly linked with a move away from United, with his second spell at the club not always going as smoothly as the club would have hoped.

This summer transfer window is no different, with French media reporting that the Frenchman is on Paris Saint Germain’s radar. Pochettino is determined to spend in order to achieve Champions League glory. United will be worried that they would have to let go of the talented midfielder on a free after next season and they too are determined to offer an extension to Pogba. 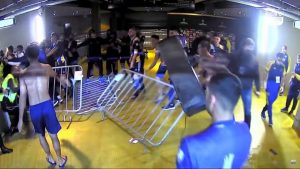 A controversial VAR (Video Assistant Referees) call sparked shocking scenes in the Copa Libertadores as angry Boca Juniors players stormed the tunnel before clashing with on-duty police. Boca crashed out of the Copa Libertadores at the round-of-16 stage on Tuesday (20) after being beaten on penalties by Atletico Mineiro in Belo Horizonte.

The away side felt that they had a legitimate goal ruled out during normal time, and allowed their frustrations to boil over following their dramatic 3-1 loss in the shoot-out. After the match, tunnel footage showed a number of Boca players, including former Manchester United defender Marcos Rojo, trying to gain access to the Mineiro dressing room to confront the match officials. Objects such as a fire extinguisher and metal barrier were thrown at the door in anger, with police forced to intervene to try and calm the situation down.

It has been reported that law enforcement officers used tear gas on several members of the Boca squad and staff, with it suggesting now that those involved could now be facing arrest. 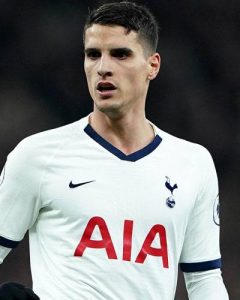 According to Goal website, Tottenham Hotspur are in talks with Sevilla to sign Bryan Gil in a deal worth £ 25 million (Rs. 4.9 b) plus Erik Lamela. They’ve come on closing down on a deal after their struggle to find a Manager earlier this year. The North London outfit are currently locked in negotiations with Sevilla for highly-rated Spanish winger Gil, who was set to star for Spain’s Under-23 side at the Tokyo Olympics later last week.

Gil has a € 50 m (Rs. 11.7 b) release clause in his current contract, but Tottenham are attempting to snap him up for half that amount by including Lamela in the deal. The Argentine attacker is ready to commit to a three-year contract at Sevilla.

According to the Telegraph, England defender Luke Shaw (pictured, on right) reportedly played the last three games of Euro 2020 with broken ribs. Shaw was one of England’s standout players at the tournament and scored in the defeat to Italy in the final. He had broken his ribs in the last-16 victory over Germany.

He could now be a doubt for Manchester United’s Premier League opener against Leeds on 14 August. It is reported that United are keen to assess Shaw’s fitness as soon as possible. The players involved in the Euro 2020 final are still on holiday, with Shaw in Greece along with some of his England team-mates, including Declan Rice and Mason Mount. United could also be without Marcus Rashford for the start of the season as he is considering shoulder surgery.

March 3, 2022 byNews Admin No Comments
As expected, Hardik Pandya is the biggest loser in the Board of Control for Cricket in India (BCCI) central contracts this time. The out-of-favour and out-of-fitness Pandya has been demoted from Grad