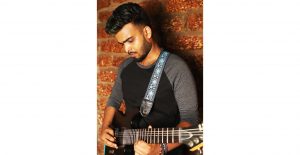 With a deep-rooted connection to the art which hails from his father Roshan De Silva – renowned Sri Lankan musician – Mike De Silva is no novice to the local music scene. Peterite by academia, and musician, performer, and guitarist by profession, his undisputed love for sound was clear and imminent from the start.

Growing up, Mike found himself constantly surrounded by music and instruments, specifically those he found at his father’s studio.

“When I was a little kid, there was this toy piano at home. I used to play various music using one finger, got bored of that, and then started using two fingers. There was a long keyboard at home that made me want to start playing using both hands. While I was at the prime of my teens, I realised that playing a keyboards wasn’t cool enough, so then I picked up a guitar,” he explained.

It began with an old rusted guitar, one which he himself modified to include all three strings in one straight line to deliver that iconic sound of rock and roll once amplified and sent through distortion. Tantalise being his first competition where he won under the categories of instrumental and solo singing, he was able to win the title of Best Musician at TNL Onstage which he took part in with his band “Symphony Experiment X-rays” (SEX in short) at the time. Deriving inspiration from old-time as well as modern-day artists such as Eric Clapton, Pink Floyd, Stephen Wilson, and Porcupine Trees, he wishes not to confine himself within a streamlined genre for his keenness in experimenting with music and sound.

“To You,” – the live recorded EP by Unscripted – debuted recently and Mike is the producer behind the album. Its uniqueness geared by notions of the individualistic colours of the band members, it has propelled the band to produce a chart-topping EP which is the first of its kind.

“So I said, since you’re recording something, why don’t we record it all live where everyone goes to a studio, everyone plays at the same time from top to bottom, and mean what the song is – to let themselves go completely, and we captured that. That was the first time an entire EP got into the charts and the first time a nine-and-a-half-minute song got into the radio.” The value-adding notion portrayed through its duration uplifted the album amongst fans, further making it distinct from the mundane. “The composition was completely unscripted, but it’s an expression. It’s not thought out – it’s duration for instance. They didn’t care how long the track was, and that was how long it took for them to tell that story,” he added.

Whilst he is known for his role played in numerous bands such as SEX and Kalm over the past, Mike currently plays with Jam Lab, a band which functions different to the usual setting. Without set practice sessions or roles, the band’s constant goal remains as the delivery of music to everyone despite segments, language, or genre.

“We don’t practise – we get on stage and we just let go. Nothing is planned. We just start playing and it just happens.” Apart from this, Mike is an educator at various platforms such as Pettah Effect where he plays a mentoring role.

Sound playing a major role in Mike’s life, his description of the subject attests to his enthusiasm and keen interest. Drawing an intriguing analogy to the difference in a beach-like setting and a hilly region, he added: “In the beach, the colour grading is different whereas in Nuwara Eliya, the colour grading is much greener. Just like this, the overall range you hear in your ears is different. There are different frequencies that stimulate the different chakras in your body and that is how you feel things when you hear things.”

October 18, 2020 byJennifer Anandanayagam No Comments
Climate Action Now Sri Lanka (CAN Sri Lanka), a volunteer-driven local initiative, recently shared that they had discovered a large number of H&M labels buried in this protected area amongst other was

September 25, 2019 byThe Sunday Morning No Comments
Disrupt Asia 2019, the fourth consecutive instalment of the conference, will be held on 12 October from 2 p.m. onwards at the Nelum Pokuna Theatre, Colombo 7.