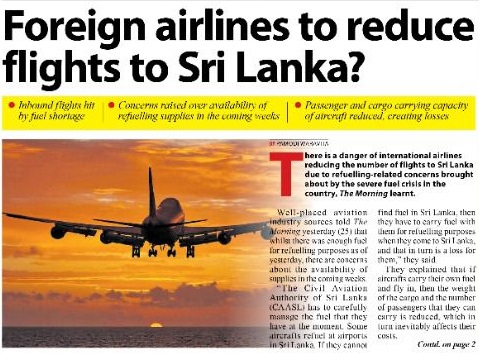 There is a danger of international airlines reducing the number of flights to Sri Lanka due to refuelling-related concerns brought about by the severe fuel crisis in the country, The Morning learnt.

Well-placed aviation industry sources told The Morning yesterday (25) that whilst there was enough fuel for refuelling purposes as of yesterday, there are concerns about the availability of supplies in the coming weeks.

“The Civil Aviation Authority of Sri Lanka (CAASL) has to carefully manage the fuel that they have at the moment. Some aircrafts refuel at airports in Sri Lanka. If they cannot find fuel in Sri Lanka, then they have to carry fuel with them for refuelling purposes when they come to Sri Lanka, and that in turn is a loss for them,” they said.

They explained that if aircrafts carry their own fuel and fly in, then the weight of the cargo and the number of passengers that they can carry is reduced, which in turn inevitably affects their costs.

“About 500,000 litres of jet fuel is needed per day. This is obtained from the Ceylon Petroleum Corporation (CPC). If they can ensure a constant supply in the coming weeks, then it will not be a problem,” they said.

Earlier this month, the national airline of the Maldives – Maldivian – suspended its scheduled flights to Colombo International Airport Ratmalana (CIAR) indefinitely until the current situation in the country improves.

Speaking to The Morning at the time, the AASL Chairman said that the reasons behind this decision by Maldivian were purely financial.

“They cannot operate due to the current situation in the country, as demand for trips to Sri Lanka has fallen. Their reasons are simply financial, as the prices have doubled since they commenced operations to Sri Lanka. Obviously in such a situation an airline cannot continue to operate.”

Maldivian had commenced international regional flight operations between its main hub at Velana International Airport, Male and the CIAR on 27 March 2022, the same day the airport was declared open for international operations following a grand opening ceremony.

Early this year, India initially extended a $ 500 million credit line for fuel imports to Sri Lanka. It was later extended by $ 200 million. With these credit lines now running dry, Sri Lanka is once again facing difficulties in importing fuel as the economic crisis, fuelled by the shortage of foreign exchange reserves, has affected the country’s energy sector. Last week saw some of the worst fuel queues in the country so far, with the public having to endure fuel queues which last days to obtain a rationed amount of fuel for their vehicles.

However, on Monday (23), the Cabinet of Ministers approved a proposal to obtain another $ 500 million credit facility from the Export Import Bank of India to fund Sri Lanka’s fuel imports. Minister Wijesekera said that while India has agreed to this additional facility, the technical discussions are currently underway regarding the matter.

Azath Salley hospitalised while in custody

May 19, 2021 byMihi Perera No Comments
Former Western Province Governor Azath Salley has been hospitalised due to a sudden heart attack.

July 3, 2021 byNews Admin No Comments
The Excise Department has permitted liquor manufacturing company W.M. Mendis & Co. Ltd, owned by Arjun Aloysius of the Perpetual Group, to re-commence its operations by signing an agreement under stri