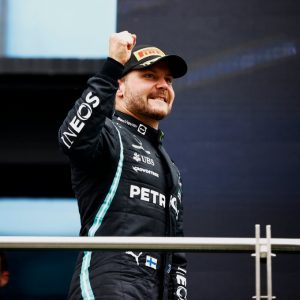 Bottas delivered his 10th career victory and first win since Russia 2020, also gaining an extra point for the fastest lap.

Red Bull too had a day to remember with their Championship contender Verstappen’s podium finish seeing him overtake Lewis Hamilton on overall points in the individual Driver’s Championship.

A heavy downpour and a greasy track on race day and over the weekend, caused teams to switch to intermediate tyres to ensure a safe race for all drivers. Bottas led the race with Verstappen not far behind, whilst Hamilton had to start in 11th place, having taken a 10-place engine-related penalty.

Hamilton surged into the top five by lap 11 having passed Alpha Tauri’s youngster Pierre Gasly and later saw him take fouth place when Red Bull’s Perez had to pit.

Le Clerc’s pit saw Hamilton take the third place with 10 laps to go, but the Englishman could not finish the race having not pitted himself later, giving up fourth place in Lap 51 of 58 and finally seeing him finish in fifth position.

The driver of the day recognition went to Ferrari’s Carlos Sainz, who started 19th on the grid after an engine change. Sainz manoeuvred his Ferrari deftly through the field to claim an impressive eighth position at the flag.

Verstappen now leads the individual Driver’s Championship by six points, with just six races remaining in the season. Formula 1 will be back again in two weeks’ time, as the US Grand Prix makes a return on the 22-24 October. 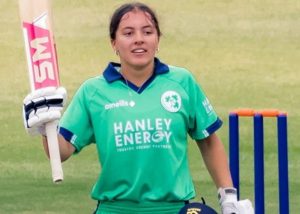 Ireland’s Amy Hunter celebrated her 16th birthday by becoming the youngest player to hit an international century in yesterday’s one-day game in Zimbabwe. The Belfast schoolgirl notched 121 not out as Ireland made 312/3 after batting first in the final game in the series.

India’s Mithali Raj held the previous record when hitting an unbeaten 114 against Ireland at the age of 16 years and 205 days in June 1999. Shahid Afridi is the youngest man to hit an international century. Afridi was 16 years and 217 days old when he hit 102 in a one-day game against Sri Lanka in 1996.

“When I got to my hundred, I had no idea what to do,” said the thrilled teenager, who hit eight fours in her 127-ball innings.

Thibaut Courtois yesterday (11) accused football governing bodies of prioritising money over the welfare of players, who he feels are being treated like “robots”. The Real Madrid goal-keeper played in both of Belgium’s Nations League games during the current international break. This includes Sunday’s third-place playoff with Italy, which sparked the 29-year-old’s criticism.

“This game is just a money game. We have to be honest about it,” he told Sky Sports, adding “We just play it because for UEFA (Union of European Football Association). It is extra money and it is an extra game on TV.”

July 1, 2021 byRevatha No Comments
The major sports happenings on the day

January 17, 2019 byRevatha No Comments
The tourists were in the firing line fielding close to the wicket in Hobart