November 8, 2020 by Madhusha Thavapalakumar No Comments 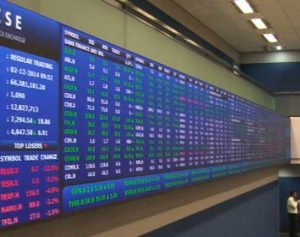 Even though foreign securities grew to 26.9 billion in January this year from 26.86 billion in December, it recorded a drop of 26.88 billion in February and it dropped further to 26.82 billion in March, during the time Sri Lanka detected its first national case of Covid-19. Following which, the Government swiftly announced a seven-week long islandwide lockdown and it is notable that during this lockdown period, the CSE too shut down its trading.

In the days leading up to the initial closure of the CSE on 16 March, the CSE’s circuit breaker was activated multiple times after the Standard and Poor’s Sri Lanka 20 (S&P SL20) index, which includes the 20 largest companies by total market capitalisation listed on the CSE, fell by 5% slabs several times, triggering 30-minute halts in regular trading. The following week, it remained closed for four days with the Government declaring holidays. It was opened only on Friday (20 March) that week and that too for a shortened trading time. The stock market was opened again only on 11 May.

Since then, securities held by foreigners have been on the decline as it dropped to 26.53 billion, 26.42 billion, and 26.22 billion, respectively, in June, July, and October this year. Regardless of decreasing foreign securities, the total number of securities held by both foreigners and locals have been up and above the 100 billion mark since the reopening of the market in May. This is because domestic contribution remained well above 77 billion mark since May as domestic securities were 77.11 billion and 77.23 billion, respectively, in June and July. As of end-October, securities held by locals shot up to 88.11 billion, a significant growth since the reopening of the market.

August 8, 2021 byNews Admin No Comments
With the Ceylon Petroleum Corporation’s (CPC) recent requests from the Bank of Japan and State Bank of China to obtain loans at a lower interest rate receiving unfavourable responses, the CPC has now

December 2, 2021 byNews Admin No Comments
The Port City Colombo Marina welcomed the MY Kalizma – The Classic Superyacht, once owned by Hollywood screen idols Elizabeth Taylor and Richard Burton. The first superyacht to sail into the Port City