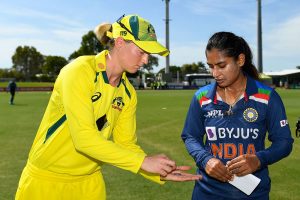 Meg Lanning (on left) with Mithali Raj at the toss before Australia vs. India first ODI in Mackay, Queensland, Australia on Tuesday (21)

Australia’s young stars led from the front in their women’s One-Day International (ODI) series opener against India as Meg Lanning’s side secured a 25th straight win in the format on Tuesday (21). Fast-bowler Darcie Brown was only 15 years old when Australia started their current winning streak, and all-rounder Hannah Darlington 16. The rookie duo accounted for six wickets on Tuesday as India were held to a total of 225/8. Brown, playing her second ODI, took 4/33, while debutant Darlington chimed in with 2/29. Australia had little trouble chasing down a target of 226, with Alyssa Healy (77) and Rachael Haynes (93 not out) – two of the four players involved in all 25 wins in the current streak – putting on a 126-run opening stand before Captain Meg Lanning (53) added the finishing touches in a nine-wicket win.

India will play three ODIs, a Test, and three Women’s Twenty 20 International (T20I) in their tour of Australia.

Lea Tahuhu stepped up with bat and ball in a nervy win for New Zealand against England at Leicester also on Tuesday. Needing a victory to keep the series alive, New Zealand elected to field first and duly bowled England out for 178 with Tahuhu taking 5/37. Tahuhu stepped up again in the chase, scoring an unbeaten 19 alongside Player of the Match Maddy Green (70 not out) as New Zealand got home by three wickets in the 46th over. Coming off back-to-back defeats, New Zealand made two changes to their eleven. Molly Penfold was handed her ODI debut in place of Jess Kerr while Hayley Jensen replaced Hannah Rowe. For England, Nat Sciver was rested for the game with Katherine Brunt returning to the eleven to replace her.

Zimbabwe’s Sean Williams broke into the top 10 of MRF Tyres-sponsored International Cricket Council (ICC) Men’s T20I Player Rankings for all-rounders, having played a key role in their 2-1 series win over Scotland recently. Williams was the second-highest run-scorer for Zimbabwe with 89 runs at an average of 44.5 and a strike rate of 104.7, which included a vital 60 not out in their 10-run win in the second T20I. In the same game, he also picked up the wicket of Richie Berrington at a crucial juncture in the match that turned the game in Zimbabwe’s favour. Williams’ batting exploits also helped him move 13 places up to the 78th spot in the rankings for batters. His team-mate Richard Ngarava attained a career-high ranking in the charts for bowlers, moving up 43 places to the 36th spot after a sensational showing with the ball. In the three matches, he scalped four wickets at an economy of just 6.08.

“Go back to the trees!” – ‘How We Kneel, How We Rise’ by Michael Holding is out

October 4, 2020 byRevatha No Comments
The first corruption approach on a player is reported in the IPL 2020, which has faced an array of similar incidents over the last 12 years