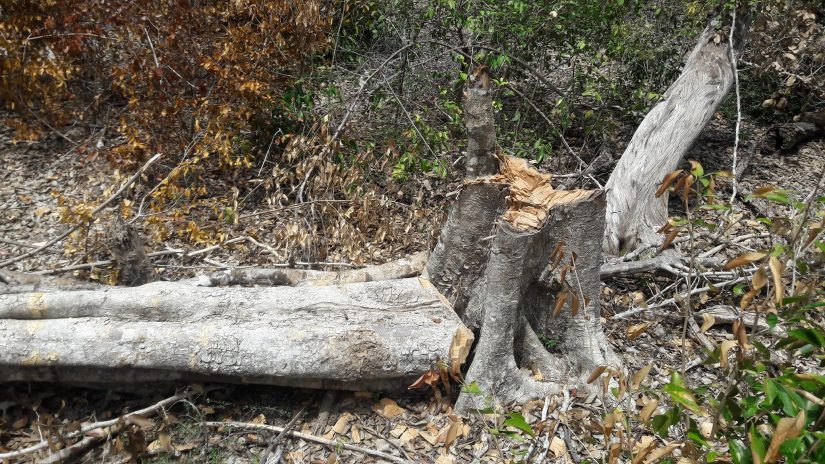 Amidst the islandwide curfew, organised groups have been misusing their curfew passes and land clearance permits to gain access to forest reserves, where they have engaged in illegal land acquisitions and timber rackets.

Several such incidents were reported since the beginning of April and the area Police along with the Forest Department officers have been able to apprehend the suspects and charge them in courts.

Pamburugaswewahinna Reserve in Gomarankadawala is one of the few forests situated in the Trincomalee District. The forest is home to many endemic trees of Sri Lanka yet in the recent past, an organised group of land encroaches destroyed about a 20-acre land area of the forest by cutting down massive trees such as weera, palu, buruttha, and Ceylon ebony.

It is reported that at least 280 trees had been felled during the deforestation process. Two of the suspects had been later arrested by the Gomarankadawala Police.

The suspects along with few more people had entered the Pamburugaswewahinna Reserve on 5 April and cleared about 10 acres of the forest undertow at the banks of the reservoir and then used electrical saws to fell the massive trees on an additional land area of 10 acres.

Upon hearing about the forest destruction incident, Governor of Eastern Province Anuradha Yahampath had instructed the Gomarankadawala Police and the Department of Forest Conservation to carry out an investigation in the area.

During the investigation they were able to retrieve the electrical saws that were used to cut the trees. In addition to that, the Police had also observed that the group had damaged several ancient ruins within the forest reserve as well.

Gomarankadawala Area Forest Officer Parakum Bandra said: “The timber from the felled trees will be sent to the State Timber Corporation. The Police already started investigations on the incident and recorded statements from 12 persons. A search operation has been launched to locate the other four suspects that fled the scene when we arrived.”

In a similar fashion, the Pankulama Forest in Kuchchaveli had also been destroyed by a group of people. The Kuchchaveli Police managed to arrest five persons and charged them with illegal deforestation.

More than 30 acres of land has been illegally damaged in the adjacent areas of Pallavakulam, which is located in the Pankulama Forest. Trees and small shrubs were cut down and burnt, and many scrubs cleaned.

All these activities have been carried out during the curfew.

It is said that this group had obtained a permit to clear a land area and had also obtained a curfew pass to carry out work during the curfew. However, they had misused the permit and curfew pass and entered the forest reserve to cut down these valuable trees.

The Kuchchaveli Police are carrying out further investigations.

An illegal land acquisition incident was reported to have taken place in the Uva Province. With residents in the area saying that an organised group had taken advantage of the curfew period to illegally acquire forest land in the Kandasuridugama Grama Niladhari Division bordering the Yala National Park of the Kataragama Divisional Secretariat.

The reserve belongs to the Department of Wildlife Conservation (DWC) and is inhabited by a large number of elephants and wildlife. It is said that this land acquisition is being carried out by organised groups with the intervention of a local politician in Kataragama.

Residents said that the group was previously involved in a number of racketeering activities where they illegally acquired land which were wildlife habitats and sold them to residents and businessmen in other areas.

Residents of the area said that the government officials who inspected the land of the Yala National Park in front of the Kataragama Gam Udawa area were able to identify that the area had been cleared illegally, and established fences.

A group of more than 15 persons have taken measures to illegally acquire more than 75 acres of land from Weherakema to Sellakataragama, an area which is located one-and-a-half kilometres along the Galahitiya Road, Kandasuridugama, Kataragama.

It is learnt that they are already occupying the land with agricultural equipment and have commenced constructions on temporary tents and concrete pillars.

Kataragama Special Task Force Camp Officer in Charge (OIC) M. Palliyaguru said: “We are not able to act on this land acquisition case. We can intervene if the request is made by the Department of Wildlife Conservation. We can also arrest and hand over the culprits to the Police.”

It is reported that Kataragama Police OIC S.U. Liyanagama has deployed police teams to take immediate action regarding this incident.

All attempts to contact the Minister of Environment, Wildlife, Lands, and Land Development S.M. Chandrasena for comment proved futile.

Fuel bowser strike: Government to use other options

April 30, 2022 byNews Admin No Comments
The Government will continue fuel distribution without disruption using bowser trucks of the Ceylon Petroleum Corporation (CPC) and those which are owned by respective fuel station owners, if the Ceyl

July 24, 2021 byNews Admin No Comments
The removal of the MV X-Press Pearl vessel wreck has been delayed due to bad weather conditions, The Sunday Morning learnt.