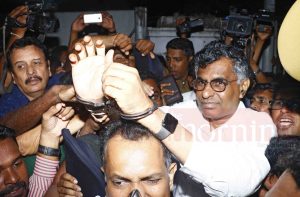 Former Minister Patali Champika Ranawaka has been further remanded until 24 December over an accident that took place in 2016.

The order was given when Ranawaka was produced before the Colombo Magistrate’s court today(19).

The Colombo Crimes Division(CCD) arrested Ranawaka yesterday(18) following an order given by the Attorney General.

Following the arrest the former Minister was produced before the Colombo Magistrate’s Court and remanded until today(19).

October 23, 2020 byCharindra No Comments
The POC has allowed an appeal to refuse an application to remove the LTTE from the list of organisations prescribed under the Terrorism Act of 2000.

Over 300 arrested for drunk driving during festive season

December 24, 2020 byLahiru Pothmulla No Comments
A total of 350 drivers have been arrested on charge of driving under the influence (DUI) during a special traffic operation carried out since December 20.