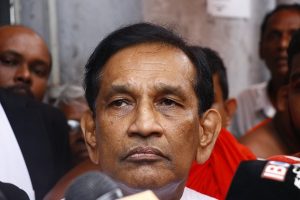 Former Minister Rajitha Senaratne who was admitted to the CICU of the Lanka Hospitals, Narahenpita, has been taken into custody by the Criminal Investigation Department (CID).

Senaratne was admitted to Lanka Hospitals yesterday(26).
CID officers arrived at the hospital last night to obtain a statement from Senaratne.
The Police was on the lookout for Senaratne as an arrest warrant was issued(24) by the Colombo Additional Magistrate over the ‘white van’ press briefing held on 10 November.

The Special Task Force (STF) and the CID had searched the house of Senaratne yesterday.

March 24, 2021 byNews Admin No Comments
Publications that contain material related to Buddhist teachings, the character of the Buddha, or which have any relevance to Buddhism are to be reviewed, regulated, and censored through a proposed Bu