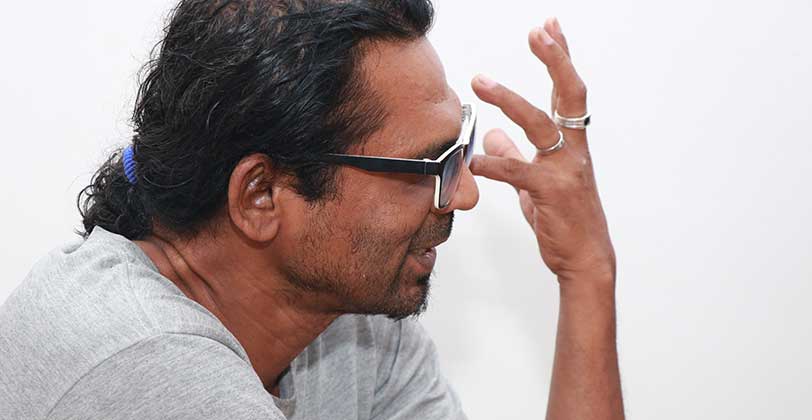 From the outside looking in with Ajith Kumarasiri 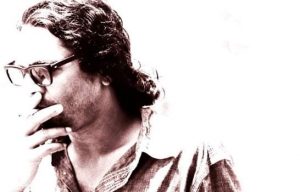 Looking a little exhausted but still cheerfully offering us a cigarette and some tea, Ajith Kumarasiri sat down with The Sunday Morning Brunch for a little chat about what’s new at his part of the world, a place where art is a way of life and creating is the only currency.

Ajith embodies a space of his own, if you’ve ever listened to his music, and with his repertoire and reputation, it is unlikely that you haven’t, and if you have you know when we say he is an anarchist in every sense of the word, consistently calling on similar souls to take on the mantle and gift a generation with the ability and need to think for oneself.

From the man himself, someone who launched his second album (Thirdworld) at a burial ground deep in a Pannala forrest, and followed it up with a Woodstock-esq concert where he proceeded to have a thirty minute conversation with a bird, about which he said “I spoke to the bird and the bird spoke back, so we had a nice conversation”.

Something of a true maestro, Ajith has that little something, je ne sais quoi about him. He is free in his behavior, his speech, a free flowing human untethered by the world around us. In our conversation with Ajith the very first thing he did was to shoot down any and all attempts on our part to profile him, to create an easy to describe bio to introduce him to our readership – we would have said he is a musician, artist, author and to an extent an activist, but that would be our description, to him, he just is.

Best known for his work on the musical score of the award winning film Road to Elephant Pass, for his work on the movie Ajith was awarded the best music director award. Chandraratnam’s Alimankada was his very first film and Ajith shared with us how he approached the composition of that score and how he often approaches most of his works.

In creating what one would call his magnum opus, Ajith said that creating for film allows a different kind of exploration in the arts, you are creating something to elevate another’s work, “Those days, I called myself a germinator of noise because I used a lot of noises for the film scores and I used silence as a sound expression” he said, sharing that he took into account the fact that there can be other sounds, whether in the audience, in the theatre and so in his score he used silence as a sound.

“I made a conceptual sound map which had a journey from Jaffna to Colombo, a geographical map and then I approached the compositions. In that I mapped out the climate changes from Jaffna to Colombo, the characters journey, from Heat to the wet sounds and then I decided on what kind of instruments to use as it is different cultures there in Jaffna and here in Colombo,” he said.

Ajith shared that even for him, despite having been recognized for the work he did, later in the movie ‘motor bicycle’ when he used sounds for that as well, and utilized silence, he remembers that the director wanted to do music but he held his ground and later they came to terms with the fact that it does actually sound better.

He shared that we are catching him at a somewhat crucial time where he is involved in multiple projects, he is currently involved in a short film that he and his collaborator Namini Panchala are working on, directed by Namini the short film titled ‘sons of M Island’ is set to be hopefully released sometime next month.

He said that he has two other films that he scored, likely to be released in April – Red butterfly dreams and Colombo.

Most importantly, he is currently in the process of creating his next album, “I have done some compositions for it” he said adding also that they have some tentative titles, and that someone at one point jokingly said that it should be called “beyond the piece” – kaallakata ehapaththen, he said this and proceeded to laugh so we apologize to his fans if this is Ajith’s idea of a misdirecting teaser.

About his fans, Ajith said that “I have my group of guys, I have a small crowd of fans not a big fan base, a niche crowd and I can say that there will be something new for them those who listen to me, some new things to think about” he said.

Since he is every bit nonconformist, rejecting the status quo, we asked Ajith about his thoughts on trends, and how an artist such as himself would choose to market themselves if they reject the mediums in place for commercial music to reach their intended listeners.

“Everything is a social construct, everything is constructed by wealthier parties with power. The media is controlled by the powerful entities of the world, the wealthy control what you and I consume via the media” he said citing reality shows as the ideal example that spouts their political agendas encouraging young people to never be original, to always pursue being like another, “the agenda is that the youth should not create or make compositions on present situations. They promote those who ‘look like’, ‘wanna be’ if you look like, sing like Jothipala, Elvis Presley. They do not want the youth to do their own thing and represent the present context of the world” he said.

Ajith believes that those who make the decisions have made it so that the youth are kept away from revealing the present context, “they do not want to reveal the truths of the present, they want you to continue to reminisce in the past” adding that “even social media now is controlled, yes there are spaces still holding on to individually but the darkness is soon approaching.”

Ajith also has an interesting view on musical education, he believes that while in the past – the Renaissance eras, Classical and Romantic, such times were for the learned. Artists were experts in their field, they knew about the subjects they were highly educated but then when we come to the modern period where art became more conceptual you don’t have to draw within the lines, you can keep something on the table you can create a different concept.

And to this day, Ajith said there remain those who hold on to that concept of traditional music theory, those who draw from those influences – that is why you often hear someone somewhere criticizing saying “you did not pitch correctly, that is not correct, it is off key” and of course there still is the market for the classical work and it is true that you need some knowledge to get a better understanding of what happened before you, he said, “but in my opinion, to do something for the future, to make new things I don’t think you need knowledge, when you create something fresh the traditions and knowledge belongs to history”.

About creating Ajith said “when I create I don’t care. I think if you create something that is new, then it doesn’t matter whether they are learned or not.”

About the current brand of artists available out there AJith said: “I can quite surely say that there are people here I have seen young people doing new things, they do not have any musical theoretical knowledge but they have amazed me, I was somewhat inspired myself when I heard these noise compositions they are doing, totally original” adding also that “I do not want to name them because I don’t want to stop their growth and progression I don’t want them to name as these guys are good and halt them where they are I believe they will grow and establish themselves I believe hey will grow and make their own names.”

Amidst many tangents, we managed to arrive at the end of our conversation – many cigarette filters left scattered around us, leaving us wondering if we’ve injected enough second hand smoke to affect our lungs, but also leaving us with a lot more to think about on society, trends and the media that we so freely consume, we said goodbye to Ajith.