From tuk-tuks to tech: Can we leapfrog our forex troubles?

Sri Lanka is in a tough spot right now. Short-sighted policy making over many years, coupled with balance of payments-related pressures that intensified over the last two to three years, have left the country in a crisis which seems to be getting worse with each passing day. Combined with significant debt servicing costs, the country needs to line up a lot of money to repay its creditors and keep the lights on, pun intended.

There is no easy way out of this and no immediate fix. But if we adopt some relatively simple policies now, we can turn Sri Lanka into a tech powerhouse in less than a decade and our forex position and our economy will have been fundamentally transformed for the better.

What is special about information technology (IT)?

Unlike most other key export sectors of Sri Lanka’s economy, the IT sector is one that can be scaled without the need for significant capital expenditure. Back of the envelope calculations reveal that the total investment to produce a graduate amounts to nearly Rs. 1.6 million (i.e. cost of a bachelor’s degree from a private institute). As each IT professional brings in an estimated Us dollars ($) 15,000 per year, the payback period from a national perspective is less than a calendar year. This is not the case for most other industries.

The IT sector also pays far better wages at all levels compared to most other key export industries. Better wages make it easier to achieve a higher quality of life, and thus can drive equitable development in all parts of the country, rural or urban.

How significant can IT’s contribution to the economy be?

Sri Lanka’s IT industry more than doubled between 2015 and 2020, both in terms of revenue and the workforce. In 2021, the industry would have generated around $ 2 billion in revenue from a workforce of approximately 130,000. And this growth trend will continue. As global tech demand and expenditure accelerates, there will be more and more opportunities for Sri Lankan tech firms to take advantage of.

At the current growth rates, the Sri Lankan IT industry should employ around 240,000 people by 2030 and generate over $ 6 billion in revenue.

But we should not be satisfied with the current growth rates. By implementing some of the policies outlined below, we can accelerate growth and end up with nearly $ 11 billion in industry revenue by 2030.

To put these numbers in perspective, Sri Lanka’s apparel industry generated $ 5.4 billion in revenue in 2021, with perhaps 50% of that being net export revenue.

Talent – the most significant bottleneck

The logic behind the infographic in Figure 1 is quite simple. If we increase the number of tech graduates produced in Sri Lanka from the current 13,000 per year to around 55,000 per annum by 2030, Sri Lanka’s tech workforce will expand by about 145,000 people compared to where it is headed right now. Paired with a small annual increase in revenue generated per employee, these additional 145,000 graduates will generate an extra $ 4 billion in revenue every year. An additional $ 1 billion will be generated by the existing workforce becoming more proficient and thus charging higher rates. 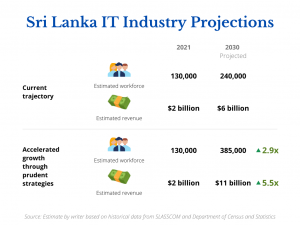 According to the Census and Statistics Department, nearly 150,000 students pass the General Certificate of Education Advanced Level (GCE A/L) exam every year. Close to 32,000 are absorbed by the local university system, 21,000 go abroad for studies, while nearly 100,000 remaining students go down other paths in search of fulfilling careers.

That is not all. If these new entrants to the industry are also encouraged to build their own versions of ground-breaking Sri Lankan software product companies such as MicroImage, BoardPAC, and 4Axis, there will be no limit to how much the tech sector’s revenue can grow.

Recommendation 1: Inculcate a love for technology in kids

Sri Lankan society is dominated by myths around screen time usage. A concentrated effort must be made to educate parents on responsible screen usage and children must be given the chance to play with computers at a young age. Only by inculcating a love for computing at a young age can a child be expected to persevere at disciplines such as programming till they master it. Knowledge on how to remain safe on the internet and using smart devices ethically must also be taught in schools, ideally during the pre-teen years.

Recommendation 2: Encourage students to learn coding through MOOCs so that graduates are produced faster

While investment in the traditional tertiary education system is always welcome, Massive Open Online Courses (MOOCs) are the fastest way to equip young adults with the skills necessary to get a job in the IT sector. As high-quality content is hosted in a well-designed virtual classroom that can be accessed from anywhere and on any device, the learning experience will be the same for everyone. Thus, assuming that broadband penetration and computer access continues to improve as they have in recent years, the problem of disparity in the quality of teaching between schools and institutions in different parts of the country is also avoided.

Global MOOC platforms already host well-regarded coding and other related programmes, and all that the Government needs to do is to encourage students to follow these courses at their own pace. Perhaps they can be supplemented by regular testing during the school year.

The Sri Lankan Government or non-governmental organisations can also approach global MOOC platforms such as Coursera, EdX, etc., and negotiate country level deals to provide access to high quality introductory tech education for primary and secondary school students. Partial or full funding for such an exercise could even be obtained from organisations such as the Bill and Melinda Gates Foundation. The Government could even design a system where courses could count for credits at the tertiary level, thereby shortening the graduation timeline.

Since great programmers do not need a piece of paper on the wall to legitimise their skills, even the private sector can come together to create a career pathway for school leavers who complete a series of selected MOOCs and have their newfound skills vetted independently. 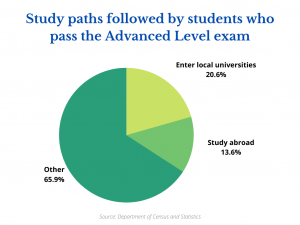 Recommendation 3: Provide a pathway for low-income families to afford computers

The significant expense that needs to be incurred when purchasing a basic laptop or computer keeps these devices out of the hands of low income families. As a nation, Sri Lanka must work out a long-term scheme that will make computers affordable for low income households. Sweden’s model is a good act to follow.

In the 1990s, the Swedish Government subsidised home personal computer purchases so that all households could be equipped with a computer. The Swedish children who benefitted from that visionary policy later went on to build global tech giants such as Spotify and Skype. With such progressive thinking, it is no surprise that Sweden is now Europe’s Silicon Valley.

A Z score should not be the deciding factor between who gets to study computing and who does not. After all, openness is one of the cornerstones of computing and the internet. Therefore, Sri Lanka must open pathways for more students to graduate with a high-quality IT education from any institute that they prefer. The Education Ministry has launched an interest-free student loan scheme, but not many know of it. The current loan scheme only applies to traditional three-year and four-years programmes, that too only for those conducted in selected local institutions.

In order to exponentially increase the number of IT graduates in the Sri Lankan labour force, we should allow students studying in all major private and public universities in the country to make use of the current loan scheme. Students willing to follow accredited and structured courses conducted via online platforms such as Udacity should also be able to utilise the loan to earn verified credentials such as “nano degrees” and complete boot camps. This way, they will also be able to explore different interests such as coding, UX, UI, and others at a significantly lower cost and within a shorter time frame instead of conforming to the rather narrow boundaries of a traditional degree.

Recommendation 5: Open up to the global tech sector and its various stakeholders

In order to accelerate the pace of the local IT industry’s progress, better integration with the global technology sector is essential. This means opening up pathways for venture capital funds, investors, and tech companies to set up operations in Sri Lanka quickly and easily. If labour is not available for a given niche, local companies should be granted permission to hire foreigners.

Digital nomads and serial entrepreneurs can also be turned into a key source of funds to power the local IT sector by implementing a well-designed tax residency scheme. Many countries offer tax residency visas with the aim of attracting wealthy and influential foreign citizens to their shores. The wealth of knowledge and experience these tax residents bring with them, and their willingness to start globally connected businesses can be instrumental in nurturing a new class of Sri Lankan tech professionals who can compete with top-tier talent even from Silicon Valley.

For instance, tax residency visas can be granted to individuals who can show proof of $ 500,000 in annual income or the ability to pay a minimum of $ 50,000 per annum in taxes, along with a minimum tax floor of 10% (compared to the high 60%-70% tax rates in regions such as the EU). Similar visa schemes are currently available in countries and regions such as the Gulf Co-operation Council, the Caribbean, Spain, Portugal, Malta, Greece, and Romania, and Sri Lanka can learn from them.

While the economy may be in the doldrums, it is important to remember that the country can emerge stronger, as long as the right decisions are made. Thailand did it after the Asian economic crisis, and there is no reason why Sri Lanka cannot either.

(The writer is a former Silicon Valley executive and is the Founder and Chief Executive Officer of Calcey Technologies which is a boutique software engineering firm specialised in developing digital products for mobile, web, and cloud)

The views and opinions expressed in this article are those of the author, and do not necessarily reflect those of this publication.

June 21, 2021 byNews Admin No Comments
A new disease which affects children who recover from Covid-19, known as Multisystem Inflammatory Syndrome In Children Temporally Associated With Covid-19 (MIS-C), is displaying signs of growing in Sr

September 6, 2021 byAazam Ameen No Comments
The funeral of the late Sunil Perera was held at the Borella cemetery today (06).