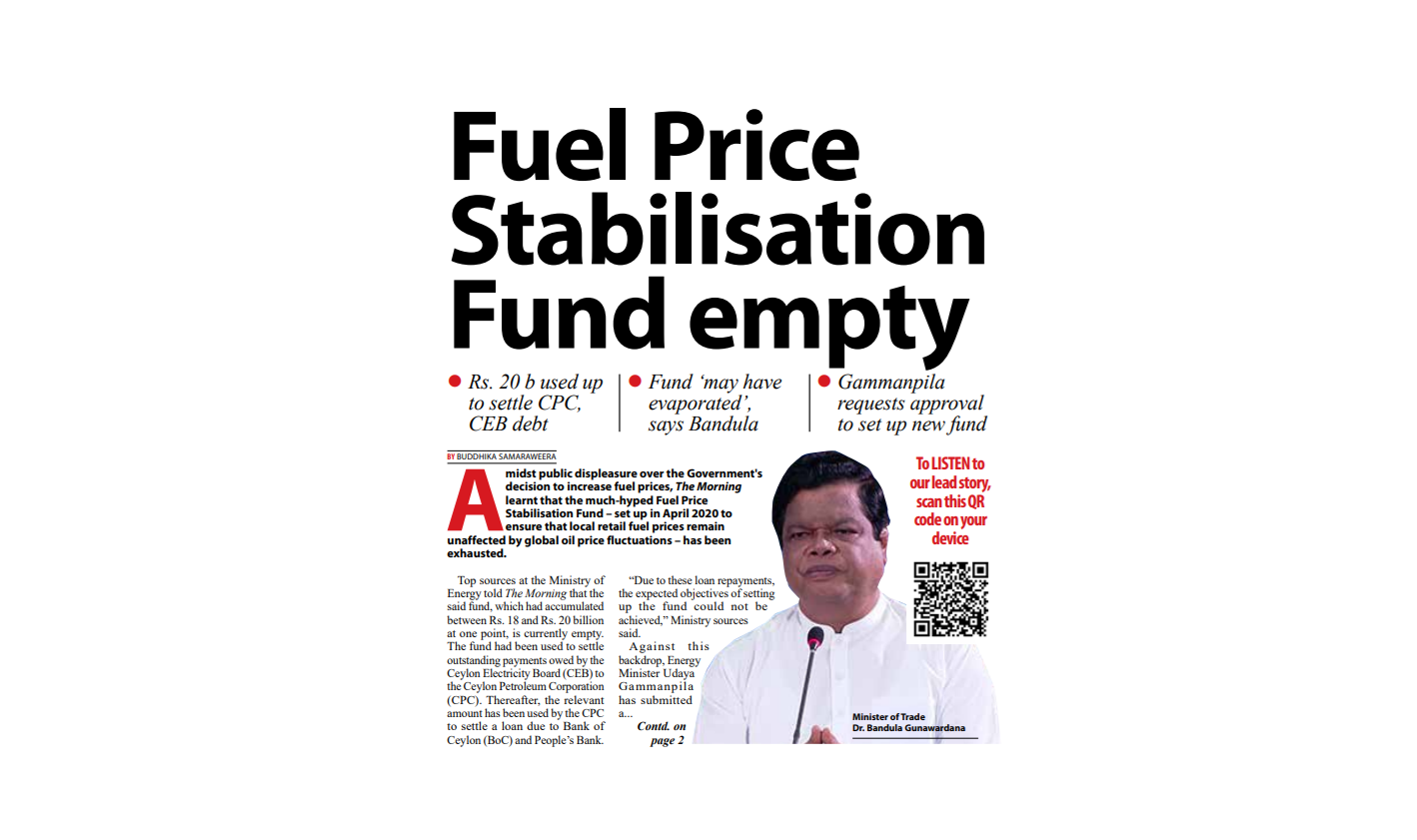 Amidst public displeasure over the Government’s decision to increase fuel prices, The Morning learnt that the much-hyped Fuel Price Stabilisation Fund – set up in April 2020 to ensure that local retail fuel prices remain unaffected by global oil price fluctuations – has been exhausted.

Top sources at the Ministry of Energy told The Morning that the said fund, which had accumulated between Rs. 18 and Rs. 20 billion at one point, is currently empty. The fund had been used to settle outstanding payments owed by the Ceylon Electricity Board (CEB) to the Ceylon Petroleum Corporation (CPC). Thereafter, the relevant amount has been used by the CPC to settle a loan due to the Bank of Ceylon (BoC) and People’s Bank.

“Due to these loan repayments, the expected objectives of setting up the fund could not be achieved,” ministry sources said.

Against this backdrop, Energy Minister Udaya Gammanpila has submitted a cabinet paper to the Cabinet of Ministers in April to re-establish the fund, for which Cabinet approval is yet to be granted.

Our attempts to contact Gammanpila in this regard, however, proved unsuccessful.

The fund was championed by Minister of Trade Dr. Bandula Gunawardana in March and April 2020, in his capacity as Cabinet Spokesman, as the solution to both regular fluctuations in local retail fuel prices and local consumers being burdened by high fuel prices due to increases in world oil prices.

Dr. Gunawardana, addressing a cabinet media briefing on 19 March, said that the Government had taken a policy decision to not revise fuel prices for a period of one year, irrespective of the price fluctuations in the world market. He also said that the fund would be set up to absorb both profit and loss by maintaining fuel prices unchanged through all fluctuations.

The approved cabinet paper stated that Rs. 50 billion would be provided to the CEB from the aforementioned fund, and the CPC would supply crude oil to the CEB at a rate of Rs. 70 per litre. Dr. Gunawardana also observed that the CPC’s debt stood at Rs. 600 billion in 2019; and that it had recorded an operational loss of Rs. 106 billion in 2018, and Rs. 12 billion in 2019.

“Many countries tend to look for mid-term local solutions considering the risk prevailing in domestic economies due to the slowdown experienced in the global economy. Accordingly, the Government, taking experts’ opinions into consideration, has paid attention to harvesting the benefits of the current declining trend in crude oil prices in the global market,” the cabinet paper in that regard read.

However, when contacted by The Morning for his comments on the Fuel Price Stabilisation Fund yesterday (13), Dr. Gunawardana said that the fund “may have evaporated by now”.

In 2020, due to Covid-related travel restrictions causing low demand, world oil prices dipped sharply. However, with many advanced economies rapidly vaccinating their populations, the demand for oil has recovered, boosting oil prices to their highest since 2018.

Against this backdrop, the Energy Ministry issued a statement announcing that fuel prices would be revised with effect from midnight on 11 June. Accordingly, the price of 92 octane petrol was increased by Rs. 20 per litre, and 95 octane petrol by Rs. 23 per litre.

MCSL urges govt. to ensure justice for Easter attacks by apprehending all those responsible

April 3, 2021 byLahiru Pothmulla No Comments
The Muslim Council of Sri Lanka (MCSL) today urged the government to ensure justice for the 2019 Easter Sunday terror attacks by apprehending all those responsible.

May 1, 2020 byTSM Web Desk No Comments
Janatha Vimukthi Peramuna (JVP) leader Anura Kumara Dissanayaka has announced that the JVP will not attend the meeting called by Prime Minister Mahinda Rajapksa to discuses current situation in the co