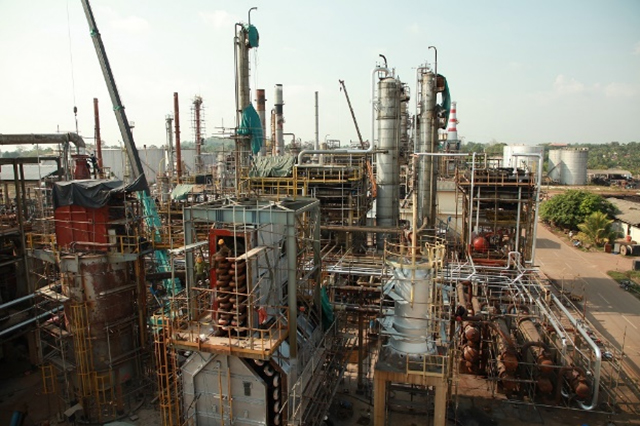 Furnace oil leak at Sapugaskanda: Probe continues to determine cause

They alleged that the reasons given by the Ministry were not technically practicable and therefore, an impartial investigation should be conducted immediately as well as steps should be taken to assess the damage caused by the recent leakage to the environment, residents, and to the Ceylon Petroleum Corporation (CPC).

As it was reported, hundreds of residents in Heiyanthuduwa area have been affected by the oil leakage which was caused as a result of the overflowing of the separator tanks containing furnace oil at the Sapugaskanda Oil Refinery with the ingress of rain water following heavy rainfall.

One resident stressed that it was very difficult to remove the oil from surfaces and that many children are suffering from breathing difficulties due to the harsh smell from the oil.

“Our wells were damaged and we have been severely affected. Our children can’t breathe and the entire area is covered with a thick black layer of oil,” a resident lamented.

Speaking to The Sunday Morning, Convener of the Energy Trade Union (ETU) Ananda Palitha said the refinery premises and the oil discharging network had been there since its inception in 1969, but this was the first incident recorded of this nature.

“The refinery built in 1969 is capable of handling over 600 mm of showers and there have been a number of heavy rains and floods reported in that area. As we noticed, this incident occurred because of the lack of proper monitoring and management of the refinery premises,” he stressed.

“There had been incidents of oil spills in the recent past from pipelines due to their dilapidated conditions and those were expected ones. But incidents like this could have been prevented. Before every heavy rain, the refinery should get ready and it should properly manage the entire premises,” he stressed.

The recent oil leak poses a serious threat to the quality of drinking water issued from Kelani River if the leaked oil mixed with the river water. But, steps taken by the Navy and Coast Guard to place a floating boom to prevent the further spread of furnace oil and to skim them by means of an oil skimmer, has prevented any adverse impact on the water distribution of Ambatale and Biyagama water treatment plants as well as to avert its environmental impact to the area.

Meanwhile, Minister of Energy Udaya Gammanpila said on Tuesday (8) that steps will be taken to pay compensation to people who are affected by the overflow of the furnace oil at the Sapugaskanda Oil Refinery.

Explaining that the area where the Sapugaskanda Oil Refinery was located was flooded due to the separator tanks containing furnace oil at the refinery having overflowed with water, he said the plant has been a groundwater treatment plant since the 1960s.

He further added that he had appointed two committees as the Minister of Energy to look into this particular incident and oversee the real reason for this incident, whether it was due to some negligence on the part of the officials and what steps should be taken to prevent such incidents from recurring.

Accordingly, the damage caused by this incident will be calculated and action will be taken to compensate the affected and the committee headed by CPC Senior Manager Y.B.M. Priyankara will be in operation. The committee has been instructed to submit the relevant committee reports within 14 days.

There have been a number of oil spill incidents where some of them have caused serious environmental damage. Most of these oil spills have been reported from the age-old pipeline system owned by the CPC.

One such major incident reported in 2018 was from a leakage in a fuel pipeline from the tankers to the Muthurajawela Oil Refinery Complex which was reported in the Uswetakeiyawa area.

The leakage had resulted in a 1.5 nautical mile oil spill and the officials believed that around 25 metric tonnes of furnace oil had been leaked into the ocean from 31,000 metric tonnes of crude oil shipment arriving from the Port of Fujairah in the United Arab Emirates while it was being unloaded.

Two such major oil spill incidents were recorded at Koggala and Lunawa Lagoon at Theldiyawatta, Muthurajawela in September 2006 and in December 2015 respectively.

For these incidents, it was the old oil pipeline that was to be blamed, but for the recent incident, it is the Sapugaskanda Oil Refinery which is said to be at fault.

Therefore, this time, the concerns have been raised over the delay of refurbishing the age-old refinery which was built over four decades ago.

The refinery meets only 25% of the local demand for refined petroleum products at present. The remaining 75% has to be imported, making a greater impact on foreign exchange. A feasibility study was conducted in 2010 for the renovation and expansion of the refinery to increase its capacity. Subsequent technological changes in the field have made it impossible to proceed on the results of the feasibility study.

From time to time, the governments in power plan to upgrade the refinery and double its capacity to boost output and to reduce the cost of importing refined fuels, but the promises have yet to be fulfilled by any government.

As of now, there have been three instances where the respective governments in power had brought in several proposals but there has been no progress.

The first of such projects came to light in 2001, where plans were afoot to renovate the refinery as a joint venture, but were abandoned due to vehement opposition. Again, there was a plan to refurbish the refinery with the support of the Iranian Government but it also had to be abandoned, as the Government couldn’t afford the $ 400 million as its part to activate the Iranian loan.

Yet again, a new renovation plan has been brought to light by the present administration with the construction of a new refinery and to renovate the existing refinery at Sapugaskanda as a BOOT (build, own, operate, and transfer) project.

To go ahead with the project, it is planned to amend the CPC Act of 1961.

The Cabinet has already given the green light to Minister of Energy Udaya Gammanpila to construct a new oil refinery with the capacity of 100,000 BPD (barrels per day) at Sapugaskanda and also to renovate the existing refinery to raise its daily capacity to 45,000 BPD from the current 38,000.

The total cost for the two projects is estimated to be Rs. 600 billion.

However, the newest attempts by the Minister were criticised by the UNP-affiliated TU led by Palitha, as he alleged that the refinery could be renovated without the amendments to the existing Act.

He stressed that Section 2.4.1 of the Cabinet paper should be removed and the sole authority of all importation, exportation, refining, sale, supply, production, mixing, and distribution of petroleum products to be kept under the CPC itself.

According to Section 2.4.1 of the Cabinet paper submitted by Gammanpila, the Minister of Energy will possess the power to “hand over the importation, exportation, refining, sale, supply, production, mixing, and distribution of petroleum products such as petrol, diesel, kerosene, and furnace oil to any party under a recognised method approved by the Cabinet”.

Meanwhile, speaking to The Sunday Morning, Minister of Energy Udaya Gammanpila said he had already appointed two committees to look into the cause of the incident and also to calculate the damages.

“The two committees were appointed last week and they are supposed to get back to me within two weeks,” he added.

Referring to the statements made by ETU President Palitha, the Minister refused to comment on the allegations levelled by Palitha claiming that he is not an employee of the CPC.

The committee has been appointed under the chairmanship of Private Secretary to the Minister of Energy Upul Wijesekera. The other members of the committee are Ministry of Energy Senior Assistant Secretary – Administration Nayana E. Senaratne, CPC Operations Manager Menaka Jeevasiri, and Attorney-at-Law (externally appointed committee member) Bhupathi Kahathuduwa. The other members of the Compensation Committee, which is chaired by CPC Senior Manager Y.B.S. Priyankara, are Sapugaskanda Oil Refinery Manager – Civil P.F.W. Dayanath and Chartered Assessor (externally appointed committee member) Tharaka Weragoda.

In the meantime, the National Water Supply and Drainage Board (NWSDB) assured that the incident had not affected the quality of the water in Kelani River.

NWSDB Additional General Manager (Western) Eng. C.C.H.S. Fernando told The Sunday Morning that the board was checking the quality from time to time and as of Friday (11) evening, there was no effect on the water quality.

“The water is safe at two plants for drinking purposes,” he assured.

According to him, the situation would completely return to normal by Saturday (12) morning.

Sunny Side Up: Minister’s probe

August 14, 2021 byNews Admin No Comments
State Minister Vidura Wickremanayake has launched a probe into an alleged violation of Covid-19 health guidelines at the Archaeology Department.

Sunny Side Up: Prasanna’s plea

July 18, 2021 byNews Admin No Comments
State Minister Prasanna Ranaweera last week set an example to many through his words and actions during his mother’s funeral.