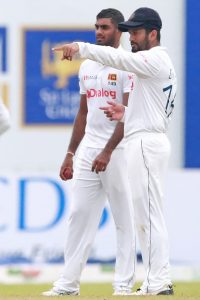 Sri Lanka Captain Dimuth Karunaratne (on right), who scored an aggregate of 230 runs in the two innings leading from the front, instructs his young spinner Lasith Embuldeniya, who had a match-bag of 113/6 including a five-for in the second essay. Photos SLC

Despite a stern fight-back from the Windies, Sri Lankan spinners came on top to win the first cricket Test by 187 runs, to take a 1-0 lead in the two-match series, on what was a gloomy, overcast day here at the Galle International Stadium yesterday (25).

Lasith Embuldeniya, nicknamed “Embula”, took some time to settle into his rhythm in the game but when he did, he was a treat to watch. In his 61 overs in the game, he gave away only 113 runs with at an economy rate below two runs per an over. Even though he only took six wickets in the game, he was by far the most consistent bowler from both sides. Especially on the last day, when others were struggling to maintain a good line and length, “Embula” played a timely role for the hosts in getting the winning result for his team. 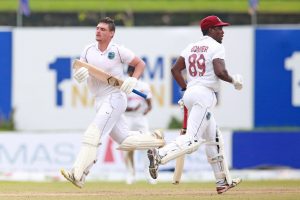 Joshua Da Silva (left) takes a run with Nkrumah Bonner. The two shared a valiant 100 runs for the West Indies’ seventh wicket from a precarious 18/6 on Wednesday (24)

The overnight batters, Joshua Da Silva and Nkrumah Bonner, were solid in the first hour of play yesterday against everything that Sri Lanka threw at them. Apart from Embuldeniya, Sri Lanka bowlers once again wavered in their length and that made life easier for the Windies batters. The fielding didn’t help either for the Lankans with Pathum Nissanka dropping both Da Silva and Bonner at short cover. It seemed as if everything was going against the hosts until Bonner was judged LBW off Ramesh Mendis. But the television review showed that the ball was spinning away sharply missing the stumps by miles! However, Just after the pair brought up the 100-run partnership, Embuldeniya grabbed the big wicket of Da Silva.

After the break, Bonner reached his half-century and got another life when Skipper Karunaratne dropped him once again off Mendis’ bowling. However, a timely move from Karunaratne saw Praveen Jayawickrama deceive Rahkeem Cornwall, enticing him to go over the top, only to top edge the ball to Suranga Lakmal at mid-off. Later, Embuldeniya was brought back and he took only three overs to take the last two wickets, complete his fourth Test five-for, and, most importantly, bring much-needed victory for Sri Lanka. 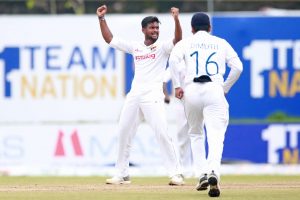 With rain looming around, Windies could have easily held on to a draw given how well they batted in the first session of play yesterday. But the match turned fully towards Sri Lanka with the wicket of Cornwall. He was looking fairly comfortable in the crease against the spinners. But when Karunaratne brought the field in and asked Jayawickrama to float it up, Cornwall couldn’t resist and ended up “skying” the ball to mid-off. Ironically, rain poured down just five minutes after the final West Indies wicket fell.

With this win, Sri Lanka gained 12 points to go up the points table of the World Test Championship 2021-23 with a 100% win ratio. With series against India is up next in the locals’ Test calendar, it is vital from a Sri Lankan point-of-view, for them to get all the possible points and maintain the same 100% record by clinching the Windies series 2-0. The second Test against West Indies will start at the same venue on Monday (29).

Dominant display by the Lions 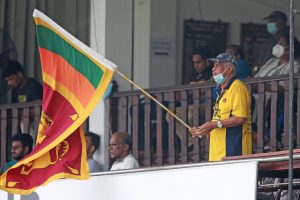 And Percy is back: As crowds were allowed on a limited scale in Galle yesterday (25), the unstoppable Sri Lanka “one-man cheer squad” Percy Abeysekera too was there waving his Lions flag

Looking back at the whole Test, Sri Lanka was on top from the word go. With the bat in hand, Karunaratne led from the front in both innings while the seniors like Angelo Mathews and Dinesh Chandimal giving valuable contributions at various phases of play. With the ball, Ramesh Mendis’ spell on the fourth-day evening gave Sri Lanka a real edge. In the first innings too, the young spin trio –Mendis, “Embula”, and Jayawickrama– were nothing short of stupendous , given how inexperienced they are so far in the Test arena.

The only worry for the Lankans would be their No. 3 batting spot. Oshada Fernando struggled in both innings and pressure is mounting on him to deliver next time while the in-form Charith Asalanka waiting in the fringes. 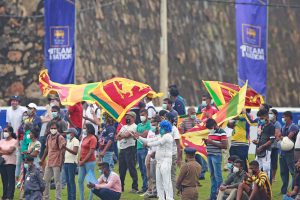 A positive sight: The fans were back celebrating Sri Lanka’s win yesterday (25) at the Galle International Stadium

West Indies 1st innings 230 all out

Nkrumah Bonner not out 68

August 11, 2021 byRevatha No Comments
The primary target will be its addition to Los Angeles 2028

March 20, 2022 byNews Admin No Comments
Indian badminton player Lakshya Sen was on the brink of the country’s as well as the entire region’s sporting history when he took on world No. 1 and reigning Olympic champion Viktor Axelsen. That was