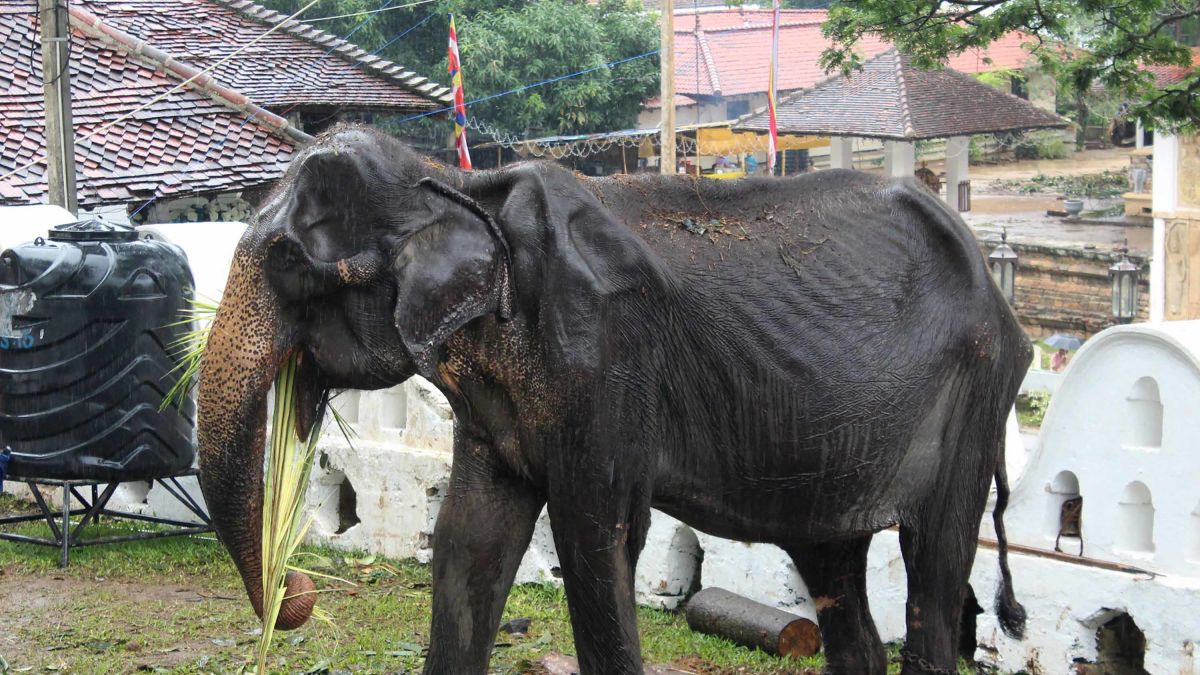 Image caption: Tikiri, a 70-year-old emaciated female elephant who was used in a parade for 10 days each year at the Kandy Esala Perahera, sparked outrage amongst activists in 2019
Photo © CNN

The recent gazette issued on the safety of tamed elephants has yet again placed the spotlight on the plight of elephants held in captivity.

An extraordinary gazette notification underlining several provisions pertaining to the protection and wellbeing of tamed elephants was issued on 19 August, by State Minister of Wildlife Protection, Adoption of Safety Measures including the Construction of Electrical Fences and Trenches, and Reforestation and Forest Resource Development Wimalaweera Dissanayake, under Section 22A of the Fauna and Flora Protection Ordinance.

The new provisions were on safety-related measures for elephants, on obtaining tamed elephants for historical and cultural processions, and standards and specifications pertaining to the traditional tools used by mahouts. The gazette also underlined a number of new legal provisions in regard to the wellbeing and treatment of elephants in captivity.

While the gazette itself came as a welcome change and another progressive step towards conservation, several animal rights activists have raised concerns over the lack of clarity on the provisions, as well as how they would be implemented, highlighting that it could lead to further exploitation of these pachyderms, The Sunday Morning learnt.

Highlighting that the Wildlife Conservation Ordinance is meant to prevent the exploitation of wildlife, activists opine that the lack of clarity provides more leeway for exploitation and would only put these animals in further danger.

Speaking with The Sunday Morning, Centre for Conservation and Research (CCR) Chairman Dr. Prithiviraj Fernando noted that although he viewed the gazette as a positive step towards safeguarding elephants, there are several aspects that were not addressed or taken into consideration.

“While the new provisions focus on the registration of elephants – which is a good thing, because we really need to have a fool-proof method of registration – the country already has a registration system in place. However, it doesn’t mention anything with regard to elephants that are already in the system.

“Therefore, I feel that there needs to be a little more clarity in this regard, and it would also minimise the chances of these animals being exploited. As long as the law says that new elephants cannot be captured from the wild and this aspect remains unchanged, the new provisions are indeed a positive step towards safeguarding these animals,” he noted.

While the gazette further highlights standards and specifications pertaining to the traditional tools used by mahouts, as well as the use of only minimum force when an elephant is behaving violently, it also prohibits the use of harmful drugs to control an elephant.

Furthermore, the gazette also limits the weight allowed on an elephant whilst using a proper saddle, and specifies that when such an elephant is used for tourism or other such activity, not more than four persons shall be allowed to ride it. Meanwhile, the riders in charge of the elephants have been banned from drinking on the job.

The new laws also state that if a veterinary surgeon deems an elephant as being unfit for work, the elephant cannot be employed for any service or duty. It also limits the time period that an elephant tows a vehicle to only four hours per day, and the weight carried by an elephant (in instances other than when a saddle is used) to one-third of the said animal.

Speaking in this regard, CCR Chairman Dr. Fernando further pointed out: “Elephants that are used for perahera processions are covered in heavy cloth, and they have to stay in those clothes for long periods of time, due to which they are unable to regulate their body temperatures properly. This especially happens when the animal’s ears are covered. Likewise, there are certain aspects such as this that are yet to be addressed, along with the fact that most of these elephants have to walk vast distances in chains.”

Meanwhile, a biometric identity card would be issued to all those who currently own elephants, and accordingly, the gazette has called upon those who own an elephant through a license, a “sannasa” (grant), other legal documents, or by succession, to register their elephants under these new regulations.

In that light, the CCR last week called for an online public database on all elephants in captivity to be established in order to identify those who have obtained the compulsory licence and the biometric identity card as per the new government regulations on tamed elephants in order to ensure that the illegal capture of elephants is reduced.

Nevertheless, animal rights activists have expressed apprehensions about the new laws, highlighting that the main objective of the latest gazetted regulations is not captive elephant welfare, but rather regulating the registration of tamed elephants, and that it further dilutes the authority of the Department of Wildlife Conservation and Department of Zoological Gardens on captive elephants. Instead, it passes those powers to the Ministry of Buddhist Affairs and the Tamed Elephant Owners’ Association, leaving more room for these animals to be exploited and even used for profit.

While it is estimated that there are nearly 42 elephants in private ownership at present, 38 of these animals have been handed over to zoos to be looked after, The Sunday Morning learnt.

According to Ministry of Buddhasasana, Religious, and Cultural Affairs Secretary Prof. Kapila Gunawardana, a total of 108 elephants are under the care of zoos around the country.

Speaking to The Sunday Morning, activist and environmentalist Sajeewa Chamikara stated that there are several loopholes in the gazette that may further endanger the dwindling population of elephants in the country.

“The latest gazette has so many flaws, and this is a blatant effort to continue to exploit animals under the guise of updating the orders for registration of tamed elephants after 30 years, and it would only do more harm than good,” he noted.

Meanwhile, speaking with The Sunday Morning, State Minister Dissanayake said: “The new gazette has been introduced to protect these animals, and the wellbeing of the elephants remains our topmost priority.”

Several attempts to get in touch with Ministry of Buddhasasana, Religious, and Cultural Affairs Secretary Prof. Gunawardana for further insight in this regard, proved futile.

August 5, 2020 byTSM Web Desk No Comments
Over 2,000 people will lose the opportunity to vote at today’s (5) parliamentary election due to the Covid-19 pandemic, as they are still undergoing the quarantine process at 33 quarantine facilities

August 12, 2021 byAazam Ameen No Comments
A mobile vaccination effort carried out by the Sri Lanka Army will be in operation from today (12).