September 16, 2020 by themorningeditor1 liberty No Comments 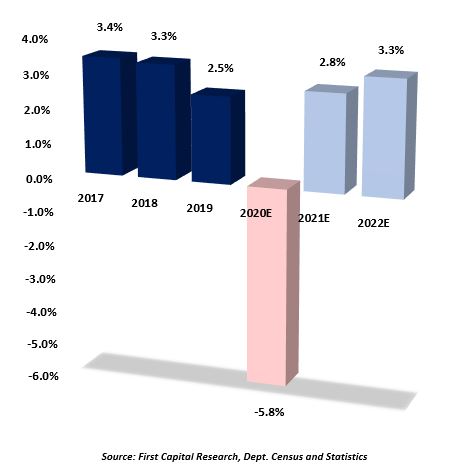 First Capital Research (FCR) estimated that Sri Lanka’s GDP would see its steepest contraction in history of -5.8% in 2020 following the unexpected contraction in Q1 GDP growth of -1.6%.

Amidst the lack of demand for credit, import restrictions, and the slowness in recovery of consumer demand, GDP growth would turn positive only by Q4 2020, FCR notes in its Mid-Year Outlook 2020 released yesterday (15).

“Considering the heavy CBSL (Central Bank of Sri Lanka) holding volume and inevitable relaxation of import restrictions, economy may showcase a currency spike followed by an interest rate spike, resulting in another shock to the economy which may prevent a V-shaped recovery while inducing a W shape for the recovery process.”

It adds that overall trade contraction and extended import restrictions may improve current account to a marginal surplus, but deficit may expand back closer to $ 1 billion in 2021E once restrictions are lifted.

“Lack of FDI (foreign direct investment) and limited borrowing options may result in a substantial BOP (balance of payments) deficit in 2020E. However, in the wake of 2021E, foreign debt raising becomes critical while at the same time it’s likely to be a major challenge.”

It notes that foreign reserves are under pressure as Sri Lanka’s financial gap surges while other foreign currency borrowing options are also limited. FCR expects the Government to raise about $ 5 billion for 2020 compared to the $ 6 billion of foreign currency repayments. It is estimated that out of the $ 5 billion likely to be raised for 2020, the Government has already raised or secured $ 2.4 billion during the first seven months of 2020. Therefore, foreign reserves are expected to dip to $ 6 billion by December 2020.

January 20, 2019 bythemorninglk No Comments
UK based EIU has forecast Sri Lanka’s GDP growth to be 4.1% in 2019 and that the government would fall short of four key intermediate goals of its 'Vision 2025' plan.