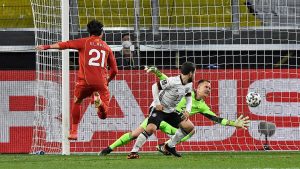 The winner for Macedonia came five minutes from the final whistle. Eljif Elmas was the goal scorer for them

The “Match-day 3” of the European Qualifiers for 2022 Qatar World Cup concluded on Thursday (1). Germany took headlines for all the wrong reasons while England kept their unbeaten run alive.

Germany was in the headlines this week as they got beaten by the ultimate underdog, North Macedonia.

Goran Pandev opened the scorecard for Macedonia in first-half injury time. Manchester City midfielder managed to equalise in the early stages of the second half with successful penalty. The winner for Macedonia came five minutes from the final whistle. Eljif Elmas was the goal scorer for Macedonia.

Rest of the results

Spain managed to beat Kosovo 3-1 on Thursday. Dani Olmo and Ferran Torres scored in the first half. Kosovo cut down the deficit with a goal in the 70th minute through Besar Halimi. Five minutes later, Gerard Moreno put the game to bed for Spain with the third goal.

Italy had an easy game against Lithuania which they won 2-0 on Thursday. Stefano Sensi and Ciro Immobile were the goal scorers for Italy.

France won their final game 1-0 against Bosnia and Herzegovina on Thursday. Antoine Griezmann was yet again on the scorecard for the French.

England beat Poland 2-1 in Wembley. Harry Kane opened the scores with a penalty and their center-back Harry Maguire sealed the game in the 85th minute.

Poland only managed to score one goal through Jakub Moder. Poland were badly missing the services of Robert Lewandowski. The “Match-day 4” will commence on 1 September 2021.

A media rights ‘war’ between ICC and IPL?

September 19, 2021 byRevatha No Comments
ICC to advance TV rights selling for next cycle before IPL does it

This Week’s Quote from a Legend: – Mickey Arthur

May 15, 2021 byRevatha No Comments
Our weekly sports quote from a legend