Hema Shironi is a multidisciplinary artist who now lives in Kilinochchi, and recently completed her MFA at Beaconhouse National University, Lahore. Shironi’s art practice is deeply rooted in observance of the history of colonisation, civil war, displacement, and migration, which she highlights through personal stories and experiences of living in Sri Lanka. 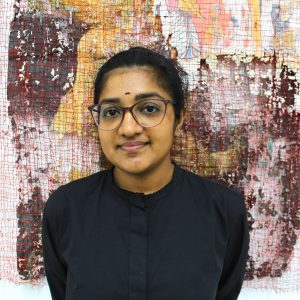 In conversation with Shironi, she explained that due to the history of colonisation; civil war, displacement, and migration has been a common-lived experience of the community that she belongs to. Thus, her art practice is deeply rooted in observance of such conditions which she highlights through her personal stories and experiences of living in Sri Lanka.

The concept of ‘home’

From childhood, her family has been migrating from one place to another place that always created confusion to her while connecting with the surrounding community. In 2010, Shironi had to move from the Central Province of Sri Lanka to the Northern Province, settling down in Kilinochchi, after the end of the war. She reminisced: “I remember the difficulty to connect and how to categorise myself in the newly moved community as the question of ‘where do I belong to’ haunted me.”

Shironi’s strongpoint in her art is embroidery; which, she explained, came from a place of convenience rather than one of passion. Since she was a child, she had always had an avid interest in art, and one thing that was a constant in her home was the abundance of fabric. “My mother and grandmother were both tailors and it is something they did quite well; our house was constantly littered with scrap fabric that pushes me towards embroidery, which now, has become a passion I cherish,” she said. 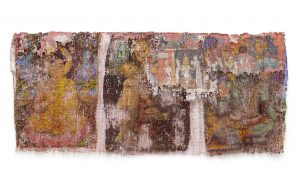 She opined that perhaps it is the fact that she associates fabric with her formative years, that cloth too, is a close association of “home” for her: “I think this is what prompted me to choose embroidery as my form of artistic expression.” From her base material, to her artist’s depiction, Shironi tries hard to bring out the concept of a home that she spent years of her life questioning.

Her love for art was also supported by her family: “I was sent to art school at the age of nine and I even followed art for my Advanced Levels. It was never opposed by my family.” Eventually, she was selected by the University of Jaffna to continue and pursue her artistic calling, upon which she graduated with a master’s degree.

Despite the many hardships and challenges she had to overcome in life, she commented that in her career as an artist, she did not face many obstacles. Perhaps it is the fact that when compared to her rough life; the minor inconveniences of her career pales in comparison, but she brushed off what little issues she faced. “The biggest struggle that comes to mind was when I had to pick an artistic medium, but I eventually found what I was most comfortable with and what inspired me the most,” she added.

A picture speaks a thousand words

When talking about where she draws inspiration from for her art, she described that the bounded landscape there, the day to day life experiences, and local beliefs always reminded her of her identity and kept her grounded. This is a huge part of her art, as she draws inspiration from her wandering life, while recalling memories of rented houses and constant relocation. The idea of identity in her practice has given shape to nostalgia by recreating the places the artist lived in for short periods of time. 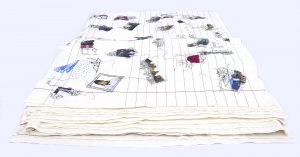 Using different sources and references to critique the human-made spaces, and the changes in environment due to human behaviour, she explores political themes around the subjects of domesticity, language, culture, memory, religious myths, gender politics, tenacity, and fragility. Working on such themes raised many questions in her mind, but a world of possibilities emerged in her work that would go as far as to help her to resolve some recondite issues related to her notion of identity. “These themes are everything I experienced that helped me shape who I am as a person today,” she expressed.

Commenting on her style of art, she said: “I have strived to give voice to the stories of those marginalised by history with a focus on human and universal aspects of conflict and the relationship between the exploiter and the exploited.” 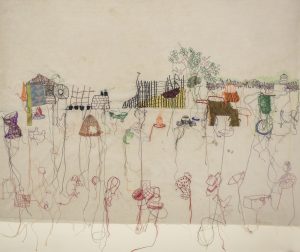 Her upcoming exhibition with Saskia Fernando Gallery is a collection of such themes held together by colourful thread; an embroidery of her life’s story shaped in the form of various houses. The work she will be presenting was created back in 2018, and some were even done before she graduated.

Giving us some insight into the process behind the creation of her masterpieces, she described: “I worked in the stitching on fabric, but it is not expanded and mixed with other forms of media like different patterns of fabric, printed papers, steel net, and left-over objects.” This, she added, is a means to give a form to her experiences with the visually layered narrative. To the untrained eye, Shironi’s work may seem messy; a randomised sticking of various threads all entwined with no meaning; but she explained that although it may seem that way, her work is meant to portray the retelling of stories by those who experienced the same disasters and lived through traumatic times.

Her exhibition at Saskia Fernando Gallery will take place from 1 October to 1 November 2021. Register at: www.eventbrite.com/e/hema-shironi-rented-shadow-and-neighbours-tickets-181557000877

Tranquillity in the hills

December 24, 2021 byNews Admin No Comments
Another holiday season has come around, but everyone’s thinking twice about heading out for the holidays, thanks to the pandemic refusing to give us a long-awaited break. Forget running away to a beac