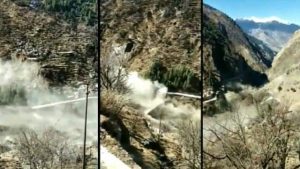 A major tragedy was reported in India’s Uttarakhand on Sunday after a glacier broke in Dhauli Ganga valley in the Joshimath area, India TV News reported.

According to the details, a dam of the Tapovan power project was breached. Reports suggested that the dam has been washed away. Teams of ITBP and SDRF personnel were rushed to the affected areas to rescue the villagers and locals. Meanwhile, the rivers in the region witnessed flash floods soon after the glacier broke.

Uttarakhand Chief Secretary OM Prakash has said 100 to 150 casualties are feared in the flash flood in Chamoli district.

Though the impact of the disaster may not be felt in Rishikesh and Haridwar, the towns have been put on alert.

Following the glacier breach, a massive flood was witnessed in Dhauliganga near Reni village, where many river bankside houses were flooded.

Commenting on the incident, the local police said Rishiganga Power Project has been damaged due breach of a glacier in the Tapovan area and those residing on the bank of the Alaknanda river are advised to move to safe places at the earliest.

The disaster was also confirmed by Uttarakhand Chief Minister Trivendra Singh Rawat, who rushed to the spot and said police and disaster management departments have been directed to deal with the situation.

“Government is taking all necessary steps,” the chief minister said.

A video posted by news agency ANI showed water level in the Dhauliganga river rising suddenly following an avalanche near a power project at Raini village in Tapovan area of Chamoli district.

July 31, 2019 byRandev No Comments
Army Commander LT Gen Mahesh Senanayake testifying today before the Parliamentary Select Committee probing the Easter Sunday attack said that there was mistrust between the Army and the TID