“Go back to the trees!” – ‘How We Kneel, How We Rise’ by Michael Holding is out

Here are extracts from a Cricinfo article on the new book ‘How We Kneel, How We Rise’ by Michael Holding, with contributions from Makhaya Ntini, Usain Bolt, Naomi Osaka, Michael Johnson, Hope Powell and others. The book was published by Simon and Schuster, 2021: 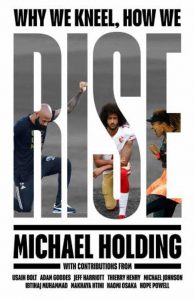 Cover of the book ‘How We Kneel, How We Rise’ by Michael Holding

Usain is 34 years old. And that could have been me talking at the same age. I travelled. I saw it. I heard it. And then I came home again. And did I talk about it with my parents? Not really.

We didn’t dwell on the things that happened when I was away. I wanted to concentrate on my sport and career. Get on with building a life. And for Usain (Bolt), the same is true. When you are the fastest man the world has ever seen, life tends to get pretty busy and your mind is occupied. When I got back to Jamaica after a cricket tour or a stint playing county cricket in England, the last thing I wanted to do was rake over all the racist incidents during a chat with my parents. And, boy, was there a lot of that stuff.

On my first tour to Australia as a West Indies player in 1975 I was abused from the crowd in Perth, Western Australia. “Go back to the trees!” That sort of thing would be headline news now, although as I type this, I have to say that I’ve just read a story about India players getting abuse from the crowd in a Test match in Sydney. Back then, I just shrugged and thought, ‘Glad I don’t live in this country. But 2020 and it’s still going on? Pathetic’.

The situations I have recounted are the ones that stick in the memory for one reason or another. And they each have the same impact. They strip away your humanity, they take away your feelings of self-worth. You feel as though you don’t belong, and I suppose, on a very basic level, that you are not wanted or liked. I think all human beings can relate to that. Like me, loathe me or be indifferent – that’s cool. Just don’t form a negative opinion about me because of the colour of my skin. It’s irrelevant.

“I just want to keep preaching love,” Usain says. “And hope that we can see something change.”

August 6, 2021 byRevatha No Comments
Some key sporting moments happened on this day

October 3, 2018 byRevatha No Comments
England are not worried about stringent security measures taken by the Sri Lankan authorities for their current series here, due to ongoing match-fixing investigations.