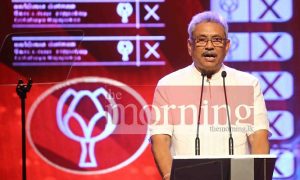 Rajapaksa unveiled his manifesto during a ceremony at the Nelum Pokuna Theatre today.

“We will not allow any foreign entity to influence the sovereignty of our country,” Rajapaksa said.

The former Defense Secretary said his policy will ensure the country is not divided.

Rajapaksa said the country will be subject to one general law adding that his government will provide the necessary infrastructure to uplift the justice system.

Amoung his promises, he said an immediate relief package will be introduced as a measure to reduce the cost of living burden of the people. “We will introduce a people centered economy. We will bring an end to poverty,” Rajapaksa said.

“Farmer debt will be written off whilst agriculture subsidies will be given free of charge. We will encourage the use of organic fertilizer and provide benefits to farmers who use such fertilizer,” He said.

He said all students who have passed their advanced level exams will be given the opportunity to pursue university education.

Amoung tax promises, he said tax on production will be reduced, VAT will be reduced to 8% and PAYE tax borne by state and private sector employees will be stripped off.  He said, a simple tax will be introduced when importing vehicles.

Meanwhile, Rajapaksa hopes to make Sri Lanka the business centre of South Asia. He said  the tourism sector will be made a 10$ bn industry through a plan.

Rajapaksa further expects to create 1 million jobs in the next 5 years  through the development of education, transport, packaging, fisheries, agriculture sectors in the country.

October 15, 2020 byCharindra No Comments
Currently, 06 buses have been identified to have transported COVID-19 infected patients on them, confirmed the Minister of Transport Gamini Lokuge at a press conference held on Wednesday (October 14).

January 29, 2021 byLahiru Pothmulla No Comments
A total of 1,000 Army personnel serving at the frontline in the fight against COVID-19 had been inoculated today and 7,500 more to be inoculated at Military Hospitals across the country tomorrow, the