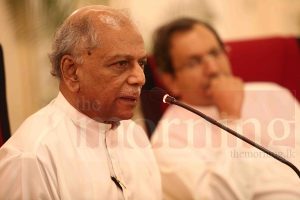 The Government says it will provide protection to the Swiss Embassy employee who was allegedly abducted on the 25 of November.

Minister of Foreign Affairs Dinesh Gunawardena made this statement during a press conference held at the Foreign Ministry today.

“We will assure full protection to the victim and her family if necessary,” he said.

He further urged the victim to lodge a complaint with the police, as it is a prerequisite in any investigation.

However, he said it was not necessary for the victim to follow the normal process of lodging a complaint.

According to  Gunawardena even the Embassy has not yet lodged a formal complaint with the police.

The Swiss Embassy, last week said due to the deteriorating health condition following the incident, the victim was not in a state to testify.

“The embassy had also requested permission to transport the victim to Switzerland through an ambulance plane but the government did not permit it, as a formal complaint had not been made by the victim, “Gunawardena said.

According to Foreign Ministry Secretary Ravinatha Aryasinha, the embassy had provided a medical certificate of the patient’s condition.

Aryasinha said the medical examination was conducted over a video call by a doctor in Switzerland.

Asked if the victim has taken refuge in the embassy, the minister said he could not confirm on the same.

However, The Ministry said that the alleged victim and family had moved out from their respective house.

Meanwhile, Gunawardena said Prime Minister Mahinda Rajapaksa had briefed all Ambassadors and High Commissioners with regard to the Swiss embassy employee case today.

December 2, 2020 byLahiru Pothmulla No Comments
Efforts would be made to minimize the size of the isolated areas from Police areas to Grama Niladhari Divisions, Army Commander and NOCPCO Head Lieutenant General Shavendra Silva said.

April 8, 2021 byNews Admin No Comments
Fully vaccinated travellers will be permitted to enter the country without subjecting themselves to a PCR test on arrival, as was earlier required, according to the new health guidelines issued by the