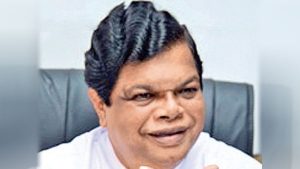 The Cabinet has decided to provide tax concessions in line with President Gotabaya Rajapaksa’s election promises.

Accordingly, the government has decided to reduce Value Added Tax (VAT) from 15% to 8%.

The government has also decided to remove the 2% Nation Building Tax (NBT), Pay As You Earn (PAYE) Tax and Withholding Tax on interests.

The Cabinet has further decided to reduce the telecommunications levy to 25%.

The Construction Industry Income Tax has been reduced from 28% to 14%.

The government has also raised the VAT ceiling to Rs. 25 million turnover per month from existing Rs. 1 million.

Gunawardane said the Government plans to bridge the gap of revenue by expanding the tax base.

Gunawardan added that the government plans to collect a small percentage of tax from a larger base in order to relieve citizens from a huge tax burden.

May 5, 2021 byMihi Perera No Comments
Various new strains, including B.1.1.7, have been identified among the COVID19 viruses currently found in Sri Lanka, the Health Promotion Bureau said today.

February 8, 2021 byNews Admin No Comments
The Sri Lanka Ceramics and Glass Council (SLCGC) has requested President Gotabaya Rajapaksa to take steps to amend the current import duty and cess applicable to the import of ceramics and tiles in...