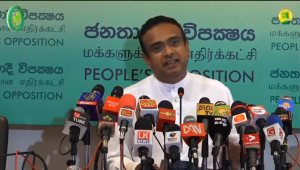 Manusha Nanayakkara of the Samagi Jana Balawegaya (SJB) accused the government of introducing new amendments to coerce the public and clergy into accepting the 20th Amendment to the Constitution.

This was stated at a press conference held at the Opposition Leader’s office today (20).

“When the government introduced 20A, it created a lot of unpopularity within the leading party, society and clergy. I believe that these new amendments are brought to coerce the public into accepting 20A, while they continue to use the new amendment to destruct the democracy of the country,” he stated.

He further urged the public not to step back in their resistance of the20th Amendment.

Only 6% of Covid fund utilised up to 31 January

May 7, 2021 byNews Admin No Comments
According to information gathered by publicfinance.lk, as of 31 January, the Government has spent only Rs. 105 million from the Itukama Covid-19 fund balance, which amounts to just 6% of the total Itu

October 25, 2021 byNews Admin No Comments
Cite minimising of fatalities and injuries among occupants in front and rear seats