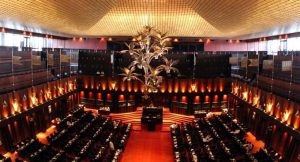 The long-delayed Provincial Council (PC) elections see further delays as the Government is yet to take a decision on the date for the same, The Morning learnt.

It was further learnt that the election would be delayed till mid-next year.

State Minister of Provincial Councils and Local Government Affairs Sarath Weerasekara said the Government had not yet decided on a date but the elections would definitely be held soon, as the holding of PC elections was a constitutional requirement.

“We can’t hold the election under the present Act, and it takes some time. At present, we are studying the PC system; whether the PCs are useful for the country or whether they are a burden to the Central Government,” he said.

The State Minister further noted that there was a public discussion on the PC system and several organisations were proposing various systems to be implemented.

“One such proposal is to divide the country into three provinces, like was done during ancient times where the country was divided scientifically into three parts called ‘Ruhunu’, ‘Maya’, and ‘Pihiti’,” Weerasekara said, adding that he had not yet taken a decision but was studying all the proposals submitted to him.

However, in February, Minister Nimal Siripala de Silva said the PC elections would be held two months after the general election.

August 16, 2021 byNews Admin No Comments
The need for strong legal agreements within a new legal framework for the plantation sector, in order to strengthen the enforcement of the demolition of old line rooms and houses in the plantation sec

April 22, 2021 byNews Admin No Comments
It is important that the relevant authorities take steps to provide quality training on the use and disposal of personal protective equipment (PPE) to all categories of healthcare workers including do