Grade 5 scholarship soon to be terminated. 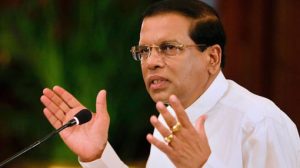 Speaking at an event in Polonnaruwa yesterday (25), President Maithripala Sirisena has said that the Government has decided to scrap the Grade 5 scholarship exams in the future.

This action was proposed by President Sirisena as he further stated that these exams have not brought about any good on the young students.

“There shouldn’t be a race in society amongst students to be accepted at the best Government school in the country, instead we must focus on improving the resources and standards in all schools.” the President further stated.

Remembering Ajith C.S. Perera, a man for all seasons

February 3, 2021 byNews Admin No Comments
A reserve sub-inspector (SI) attached to the Kuliyapitiya Police Station has attempted to shoot an officer in charge (OIC) of the same police station, The Morning learnt.