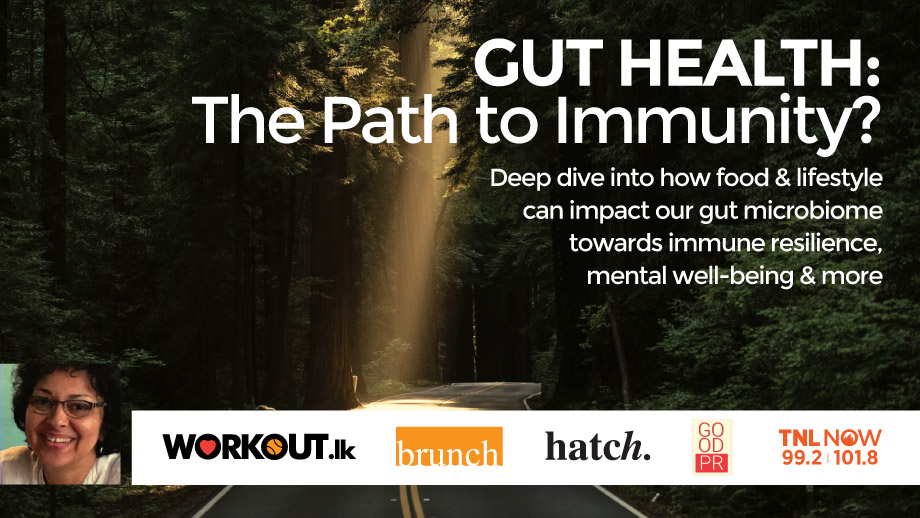 Gut Health: The Path to Immunity? by Workout.lk

With health and wellbeing at the top of our minds in the midst of the third wave of Covid-19 infections hitting Sri Lanka, independent health and fitness startup Workout.lk hosted an expert masterclass on 20 June that focused on a vastly overlooked aspect of health – one that plays a great role in our health, immunity, and vitality – gut health. The expert masterclass “Gut Health: The Path to Immunity?”, featured the expertise of US-certified natural health professional Shanez Gunatilaka speaking on how food and diet can impact our gut health, and by extension, our immune resilience, mental well-being, and general health.

Gunatilaka explained that eating healthy food alone is not enough for us to be truly healthy, because the gut microbiome dictates how much of what we eat is absorbed by our body, with food being broken down into electrons to feed the mitochondria within our cells to keep the body running. Mitochondria are an ancient form of bacteria, found only in the cells of people and animals. Essentially, mitochondria are little rechargeable battery packs in each of our cells that are fed by the nutrients that our food is broken down into by our digestive system.

This is what makes gut health very important because the gut contains an ecosystem of microbial activity (the gut microbiome) and it is this microbial activity that converts the food we consume into the various components we need for the body to function. This absorption of nutrients takes place in the lining of the gut, which is one cell thick and can easily be damaged by the food and chemicals we consume, and that is why what we eat plays a crucial role in our overall health. 80% of our immunity comes from the gut and that gut health is heavily interlinked with immunity and mental health, which means the food we eat plays a part in the regulation of our mood. In terms of mental health, many neurotransmitters including serotonin and dopamine are made in the gut by the gut microbiome, as vitamins that boost immunity.

Of the whole human body, only 43% cells are entirely human, Gunatilaka shared, and the balance 53% of cells that make up our body are microbial cells including bacteria, fungi, parasites and viruses, that all work together to create an ecosystem that keeps the body functioning at its peak.

The body has several defence mechanisms to protect itself from dangerous microbial organisms entering the body; one is saliva which contains various enzymes that begin digestion before food can leave the mouth (this is why it is important to chew your food thoroughly before swallowing); the tonsils which catch bacteria and other pathogens going past; the stomach which maintains a specific pH level (acidic, 0-7), to aid digestion; the liver which produces bile which in turn is microbial and limits pathogens; Peyer’s patches, which are small patches of immune tissue at various points in the gut acting as a frontliner of sorts and preventing anything it feels shouldn’t be in the bloodstream from making it through; and the appendix which creates a storehouse for good kind of bacteria.
The gut microbiome is a delicate ecosystem and the disruption of this ecosystem can lead to weakened immunity, compromised mental well-being, nutritional deficiencies, and a host of other health problems. A significant part of the gut microbiome is made up of bacteria, and this is why the reckless use of antibiotics poses such a risk to overall health, because antibiotics compromise the natural bacteria within the gut, weakening it.

The gut microbiome is very sensitive to chemicals, not just in the forms of antibiotics and other medicine, but to chemicals in the food we eat. Gunatilaka explained that hormones and antibiotics used in breeding and farming livestock make their way into our bodies through the meat we consume, as well as the synthetic pesticides, weedicides, and fertilisers used in agriculture and farming for fruits and vegetables.

Gunatilaka explained that these chemicals are often used without their long-term impact on human health being fully understood, citing the example of the pesticide Dichlorodiphenyltrichloroethane (DDT), which was used heavily in agriculture from 1943 for about 25 years, before it’s damning health effects were realised, leading to its subsequent ban in the US. It is still used today in many other countries however. Another example Gunatilaka cited was the weedkiller glyphosate (also called Roundup), which has devastating impacts on soil quality, destroying the enzyme pathway in soil that allows the roots of fruits and vegetables to absorb the medicinal compounds that make them nutritious. Additionally, glyphosate damages the mucosal lining in the gut causing holes in the lining and leading to “leaky gut” which leads to weakened immunity and a host of other health issues.

The damage caused to soil by compounds like glyphosate greatly affects the nutritional quality of the food grown in that soil. Soil is where the biodiversity of the Earth’s ecology lies, and when this biodiversity is destroyed, the food that is grown commercially from that soil contains only a small fraction of the nutrients it would have had if it had been grown in soil that was ecologically rich. Gunatilaka explained that this lack of nutrient-rich soil is so pervasive that many fruits and vegetables that are grown organically are still not completely organic and don’t have their highest nutrient potential because the soil they were grown in was compromised (it takes years for the effects of glyphosate on soil to correct itself).

Advising people on how to be more mindful of gut health, Gunatilaka encouraged people to go for fresh organic vegetables as well as fermented vegetables like raw sauerkraut as well as sprouted seeds, because fermented foods and sprouted seeds are richer in nutrients and aid the gut microbiome in building its strength. Gunatilaka also advised making diets as colourful as possible and to eat local, seasonal food because it is rich in nutrients and allows us to be resilient in our natural environments, saying: “We need to understand where we’re coming from, and build a good immune system.” Gunatilaka added that there is a lot of fear of illness, especially at the present time, and it is important not to feed into that fear.

March 26, 2021 byNews Admin No Comments
A protest organised by the Rally for Animal Rights and Environment (RARE) in conjunction with the Canadian advocacy group Lucy’s Edmonton Advocacy Project (LEAP) is to take place on Friday, 26 March 2

Sri Lanka, a land of opportunity

February 18, 2020 bythemorninglk No Comments
Noreen Adham comes from England. Yet, she finds herself quite at home in Sri Lanka, so much so that she is even comfortable enough to have started her own business here.

The origins of the 19th Amendment