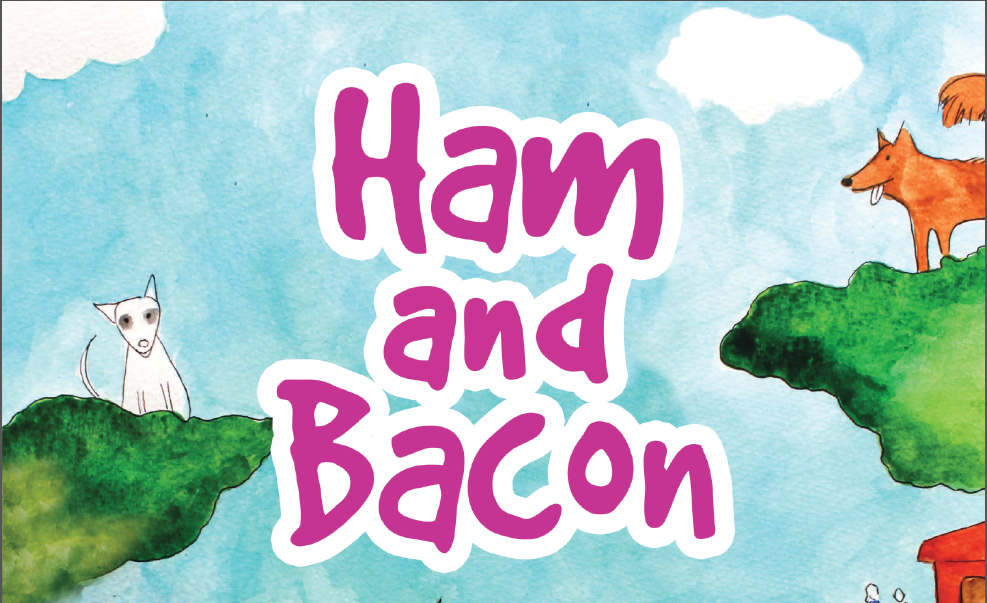 Ham and Bacon: The tale about two pigs in Malabe

August 9, 2020 by Dimithri Wijesinghe No Comments

The tale about two pigs in Malabe by Christina Britto, illustrated by Maneka Jayathilaka 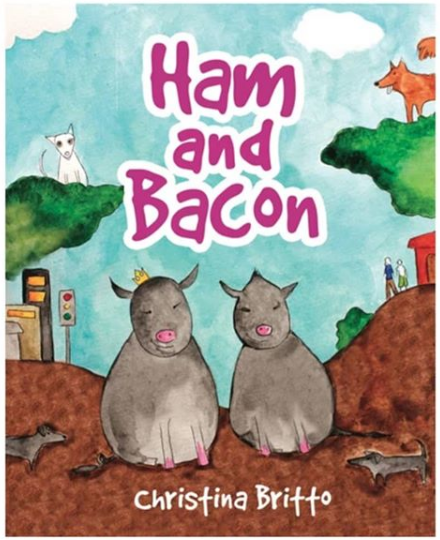 We visited Christina at her home situated in a tucked-away corner of Malabe, where she lives, surrounded by greenery, with her husband, two kids, numerous dogs (she’s lost count at this point), and the two pigs.

We chatted with Christina about how her novel came to be as we casually roamed around her garden, with her pointing out various plants they have, which they incorporate into their daily meals, and the many quarantine garden projects, like the pizza kiln her husband erected, the treehouse that is coming along nicely, and the many other plantations on their stretch of land, which all set nicely against the backdrop of a chorus of howls from 14-plus dogs she’s adopted.

About how Ham and Bacon came to be, she said: “I was trying to put my oldest son to bed and the pigs were running around; they were really misbehaving and my husband pointed out that while I was getting a bit agitated, they’re actually quite funny the way they are.” She added: “Little bits of the lines started popping up in my head and I started writing it down, and it took about an hour.”

Christina shared that she is not usually a person who finds writing a smooth process, sharing that she gets stuck often. However, this one came naturally as she wrote it. 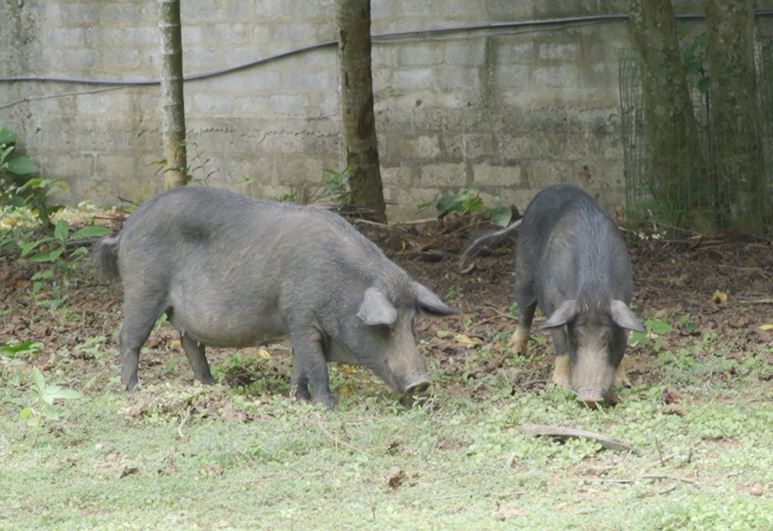 About the content of the book itself, she shared that she mostly wanted to immortalise this childhood that her children have. “They are living my dream childhood and I wanted to preserve it for them; wouldn’t it have been fun if our parents wrote a book about our childhood and our pets?” she stated.

She said that the title of the book is amusing to some; about the fact that the pigs are called Ham and Bacon, she said that as you read the book, it begins to make sense why she left the names as they were. According to her, it serves as a bit of an irony, where you see the personalities of these pigs shine through and see them for who they are; so really it’s about being kind, not only to humans but to all living beings.

Christina shared some adorable stories about the pigs and their antics in the household, recalling a hilarious moment where they broke into the fridge, somehow opened it up with their snouts, and ate nearly 3 kg of good Swiss cheese. She said that it really amazes her sometimes how intelligent they can be. 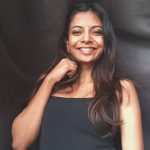 For the final product of Ham and Bacon, Christina collaborated with Maneka Jayathilaka, who did the beautiful illustrations of the piggies, and we spoke to Maneka about her contribution and her experience doing the project. She shared that she thought it was a fantastic idea from the get-go, especially considering Christina drew experiences from her real life to write the book; it just sounded like a wonderful idea to do this, she shared, not just for her kids but for other kids to have a peek into this world they live in too.

Christina shared that while she had followed Maneka’s work for some time, they were also school friends, and interestingly enough, she was the very first person who sat next to her on her first day of school, which is quite wild now when you think about it, as they ended up collaborating on her very first children’s book.

Christina shared that the technical side of getting the book published as it started out was not easy. She expressed her utmost gratitude to her husband Marcus as she said there were times she was ready to drop the project, sharing: “I wrote this story in 2016 for my oldest son, and then it was 2019, and I was with child number two and still no Ham and Bacon,” adding that she faced some difficulty in getting it published by a local publisher and that it was later suggested to her that she look outside the country for a solution. She finally managed to get things sorted. However, she did mention: “It was a little sad, because someone outside the country decided to publish a book about two pigs in Malabe.”

About the distribution of the book, she said that it is already at distribution points in the US. However, when it comes to bringing it down to put in stores here, such a large shipment of books takes time, especially considering the pandemic. However, she said that they are currently in the process of getting it on Amazon for people to order, in both paperback and digital download, which will be made available as soon as possible.

As of now, even her friends are able to get their hands on the book by asking relatives in counties where it is listed to send it through to them.

The pandemic, she said, was a blessing and a curse, with it really halting their wider plans for the book. However, she said that for them as a family, it was really beneficial in helping them realise how sustainable they can be in their way of life from where they are situated, adding that they realised how little they actually have to purchase from out to prepare their food, and that they even improved this by making an addition where they bought a chicken for eggs; they’ve really settled into a sustainable lifestyle in their green corner in Malabe.

We asked Christina about her future projects now that Ham and Bacon is completed, and whether she has anything else in the works. She did admit, albeit reluctantly, that she does in fact have something brewing. However, she doesn’t want to confirm anything just yet. She said that she never really thought of anything in terms of part two of the book, but she did imagine creating a world where she gets to put into words the life that they lead, to capture snippets of their daily routine; “The Malabe Stories”, she said. She did share that the pandemic, with all its pitfalls, did end up providing a lot of writing material, so we can look forward to something new from Christina in the near future.

August 8, 2021 byNews Admin No Comments
For all the noise we make about being an island surrounded by picture-perfect ocean, there is a surprising lack of discussion on our marine habitats and how we need to conserve them. Yes, we’re renown

Facilitating customers to create their own magical moments

January 7, 2022 byNews Admin No Comments
Having opened their doors to it’s 24-storied property five years ago in January 2017, Mövenpick Hotel is celebrating their fifth year of lighting up the Colombo skyline with its unique brand of hospit