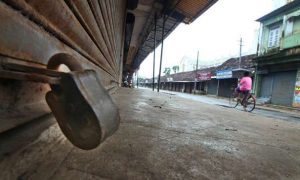 A demonstration of disobedience or a strike, more commonly known as a harthal, has been observed today (28) in Sri Lanka’s Eastern region, in revolt against the government’s decision to ban the commemoration of fallen LTTE Leader Thyagadeepan Thileepan.

Thileepan was a former LTTE leader who was held captive by security forces and died following a hunger strike.

The harthal campaign had been organized by the Ilankei Thamil Arusy Kachchi (ITAK) and several of its allies.

However, the security forces in the area termed the campaign a failure, although civilian life in Jaffna and Batticaloa came to a standstill.

June 17, 2021 byMihi Perera No Comments
Hong Kong has detected Covid-19 in a man who arrived in the city from Sri Lanka, www.news.gov.hk reported.