Has Sri Lanka finally learned its lesson on emotional vs. evidence-based agri policies?

Inflation looms large over every Sri Lankan as the price of food and other essentials continues to skyrocket. At the centre of this historic economic, political, social, and humanitarian disaster are a series of deeply flawed and widely criticised policy decisions which have plunged the nation’s agriculture sector into complete disarray.

Among the decisions being singled out for criticism, both locally and globally, is the now infamous overnight ban on the importation of all agrochemicals, including synthetic fertiliser, weedicides, pesticides, and fungicides.

These once vocal champions of organic agriculture claimed at the time that the “declining health of the average Sri Lankan” and the negative impacts of agro-chemicals on the environment, as well as the annual $ 48 billion that could be saved by halting fertiliser imports, was sufficient justification for the ban.

These same “experts” were quick to dismiss the warnings, counter-arguments, and volumes of scientific data of respected academics and professionals with actual agricultural experience as being nothing more than the dishonest lies of what the former Agriculture Minister imaginatively dubbed a “fertiliser mafia larger than the Sigiriya Rock”.

Back in September of 2021, after many months of frantic discussions with the leadership of the day, I stated the following in a widely published article titled “Sri Lankan tea’s current crisis only reinforces the value of productivity-linked wages”.

“Without any prior planning or notice, our entire sector has been coerced into blindly participating in the most unscientific experiment ever attempted in Sri Lanka’s history. The broad consensus among those with expertise is that we can start to see exponentially worse crop losses starting from the end of 2021, hitting approximately 30-40% by next year.

“If regional plantation companies (RPCs) were to have disregarded basic agronomic practices and norms in such a manner, it would have been called criminal mismanagement. With agricultural best practices now being roundly ignored in favour of an undefined and unplanned strategy – ‘100% organic agriculture’ – this historic, and intentionally misinformed self-sabotage is being repackaged as visionary and progressive.

“Regardless of short-term political expediency, reality has a way of asserting itself. With insufficient balanced nutrients as a result of the unplanned push for organic, we anticipate a series of cascading failures stemming from a collapse in productivity. No amount of rhetoric will be able to turn back the tide of negative sentiment against such developments.”

Less than a year later, all that we have stated has come to pass. Agricultural productivity in export crops has dropped by 20%. While export values of tea and rubber have increased, volumes have plummeted by 20% and 30% respectively. Had we been able to maintain production at pre-fertiliser-ban levels, we estimate additional export earnings of $ 240 million from plantation-related exports.

These shortcomings are reflected in Sri Lanka’s humiliating bankruptcy and its crippling 54.6% inflation and deadly 81% food inflation. As a result, today, the World Food Programme estimates that three in 10 Sri Lankans – 6.7 million Sri Lankans – are now facing severe food insecurity, as per the World Food Programme’s Sri Lanka Situation Report, dated 6 July 2022. For context, one of the worst famines in modern history was the Bengal Famine, which resulted in the deaths of an estimated three million Indians. Before we allow any further blunders, we must understand that these are the dangerous waters in which we are now swimming.

Meanwhile, the “overnight 100%” organic agriculture experts, doctors, and monks, whose “sole concern” was for the health and wellbeing of all Sri Lankans, are nowhere to be seen or heard from. And it is left to the once-vilified professionals and academics to now chart a roadmap out of the crisis and restore the industry on which more than 10% of our national population depend for their sustenance.

A common framework for progress

Solving this complex misadventure is going to be extremely challenging, but we do believe it’s possible. And we believe the plantation industry will have an essential role to play in this difficult and necessary journey.

However, in order to do so, we must acknowledge and examine all of the decisions that led us to this terrible low point. Moving forward, we need to appoint a sectoral task force – made up of credible industry experts, whom the Government must consult, particularly when formulating policy decisions that have the potential to impact the entire agriculture sector. Failure to do so even at this late juncture will risk even further irreversible damage being done to our industry and the millions of lives that are impacted by it.

This means that the Government in particular needs to commit to a strict regime of evidence-based policy at all times. If drastic policy adjustments are required, the Government has to take a consultative approach, seek out balanced and credible opinions, and obtain broad approval from stakeholders.

With this common agreement in place, we can finally begin to bring together the best minds in our respective industries and work in partnership towards developing a viable roadmap for a sustainable path to a true Sri Lankan economic renaissance. As Sri Lanka’s first true export industry, we believe the Sri Lankan plantation industry should be the first to take up this challenge.

For over a decade, our industry has painstakingly sought to articulate what the plantation sector requires to move forward. At present, the consensus is that reforms, investment, and knowledge sharing are most needed in our industry in the areas of:

We call on all those with the knowledge and expertise to join us in this difficult and long over-due enterprise.

(The writer is the Managing Director of the Plantation Sector of Hayleys PLC, which comprises Kelani Valley Plantations, Talawakelle Tea Estates, and Horana Plantations. A former Chairman of the Planters’ Association of Ceylon, he has 36 years of experience in the plantation sector)

The views and opinions expressed in this article are those of the author, and do not necessarily reflect those of this publication. 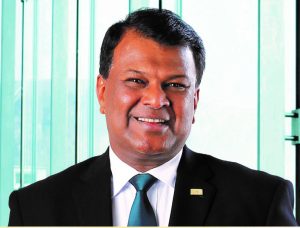 Large gatherings will not be allowed during New Year season: State Minister

March 31, 2021 byMihi Perera No Comments
State Minister Dr. Sudarshani Fernandopulle said today that the Health Ministry will not allow anyone to hold any festivals that require large public gatherings during the New Year season.

21 arrests on day of protests