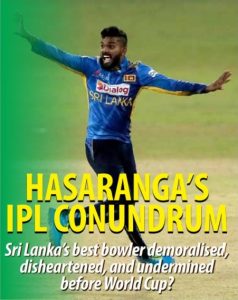 # Hasaranga was played in both those matches

# With his leg-breaks, Hasaranga bowled 36 balls, gave away 60 runs, and took no wickets

# His RCB Captain Virat Kohli is, of course, the India Captain too for the World Cup

# The World Cup starts in UAE and Oman, two days after the IPL

# The IPL final will be held on 15 October, two days before the start of the World Cup

# Sri Lanka are to play their three World Cup First Round matches on 18 (Namibia), 20 (Ireland), and 22 (Netherlands) October

# Sri Lanka are to meet Australia (featuring Maxwell and, sometimes, Christian) in Super 12 stage, if they top their Group in the World Cup First Round

# If they end up second in the Group Stage to qualify for the Super 12, then they will meet both New Zealand (Jamieson) and India (Kohli) in the Super 12s

# Aren’t the debate of ‘Money vs. Spirit’ and ‘Franchise Cricket vs. National Cricket’ still valid in a very decisive manner?

# This whole ‘confusion’ is ‘simply’ because the Indian whiskey and rum company Diageo India Pvt. Ltd., the present owners of RCB, paid Hasaranga SL Rs. 140 lakhs ($ 70,000) and ‘bought’ him for about 10 T20 matches of the season 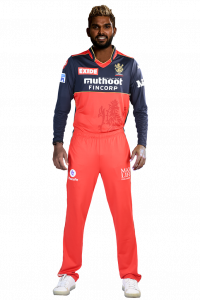 August 21, 2021 byRevatha No Comments
About SLC Premier Cricket next month

SL vs. Bangladesh 1st Youth ODI washed off at Dambulla