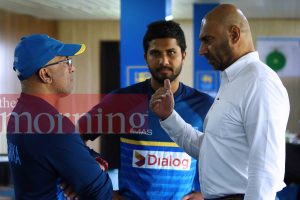 We prepared the best possible way for the Asia Cup

Sri Lanka national cricket teams’ Head Coach Chandika Hathurusingha who is currently under heavy criticism in the social media, following their early exit from the Asia Cup, on Wednesday said “Facebook represents only a small section of the fans.”

Answering a question from “The Sunday Morning,” the usually thick-skinned coach, who changed the course of Bangladeshis’ cricket, revealed that when he was in Bangladesh, he was never bothered about the media criticism as he did not understand most of the things their journalist had asked him (as they talked in their local language).

On Wednesday, Sri Lankan media targetted Hathurusingha for the controversial sacking of skipper Angelo Mathews and inquired about reasons for their unexpected defeat against Bangladesh and Afghanistan.

While accepting that they played poor cricket in both those games, Hathurusingha explained that they prepared the best possible way for the tournament but their oppositions played a better game on the given days.

“The Bangladeshis, unlike those days, are now a better-ranked side. And the Afghans also are not a weak side. That was proved by the way they fought against the world number-one Indians last night (Tuesday night).”

November 13, 2018 byRevatha No Comments
Sri Lanka are beaten by seven wickets against South Africa in their second match of the ongoing ICC Women's T20 World Cup on Monday.