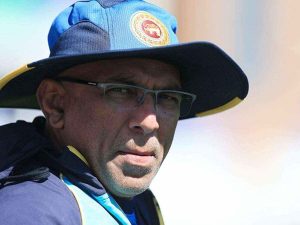 After Sri Lanka’s first-round exit from the ICC World Cup early this month, Sports Minister Harin Fernando had said he would replace the entire coaching staff of the Sri Lanka national team soon with new faces.

Jon Lewis is the current batting coach of the Sri Lanka team and Steve Rixon is their fielding coach. The contracts of those two were set to expire after the World Cup with Hathurusingha’s contract is going on till late next year.

Sri Lanka has had eleven coaches, including interim appointments, between 2011 and 2017.

SLC hired Hathurusingha in late 2017 with high expectations and for a mega salary, which is reportedly over six million rupees a month, after a successful stint with the Bangladesh national team.

But Sri Lanka’s performances hit unprecedented lows under his wings as they lost to lowly Afghanistan, as well as Bangladesh and Zimbabwe, before crashing to all-time lowest ninth position in the ten-team ICC country rankings during the World Cup.

Bangladesh 241/2 in 1st Test: Battle begins for revival and honour