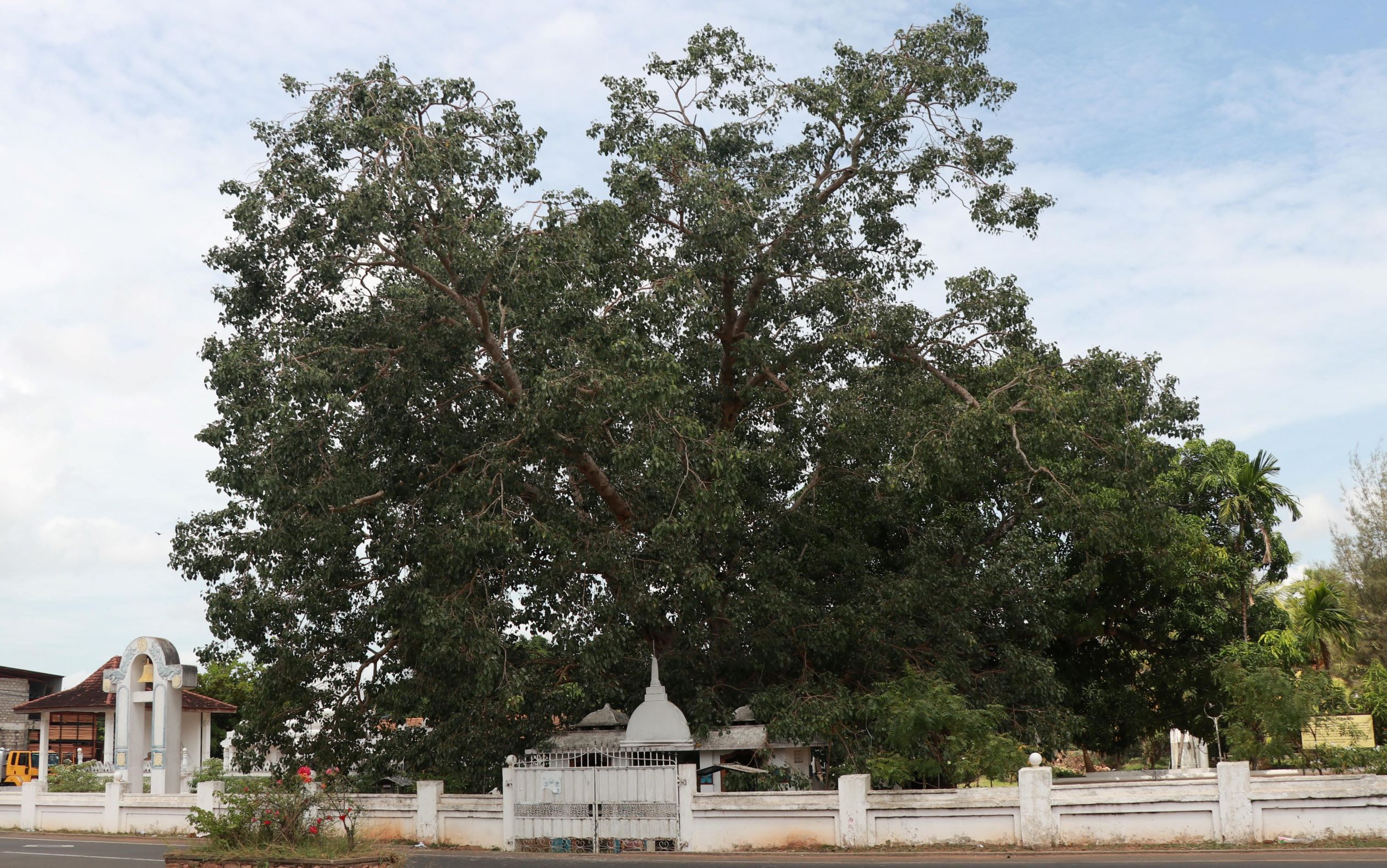 Our journey to the northern peninsula allowed us to explore the many sites of historical importance, and among the sea of Hindu kovils and Christian and Catholic churches in the township of Kilinochchi, what stood out to us was the Lumbini Viharaya which sits amidst all the rapid development taking place in Kilinochchi.

It is believed that during the Third Century BC, Theri Sangamitta, on her voyage to Sri Lanka from India, bearing the sacred Bo sapling, had rested on the very ground the Lumbini Viharaya stands today. As a mark of respect, she had then decided to plant a segment off the sapling she was to carry to Anuradhapura at the Lumbini Temple in Kilinochchi.

That itself makes this temple a historically and archaeologically important site for Sri Lankans and the people that follow the Buddha’s teachings. However, it seems to have been missed in our school textbooks, as one would have to deep dive into the history of Buddhism in Sri Lanka and want to learn about all the viharayas, stupas, and areas of importance for Buddhists to have come across it.

In this temple resides Ven. Ingiriya Dhammalankara Thera, who has been tending to the temple and preaching the Dhamma to the 30 Army divisions stationed in the Northern Province since 2011. The Sunday Morning had a brief chat with the thera on his journey as a buddhaputra.

Ordained in 2011 at the Kakulaliya Temple in Ingiriya, Dhammalankara Thera had volunteered to serve his journey as a sangha at the Lumbini Viharaya.

Sharing his experience as a layman, the thera said that he started his first job at a hotel. 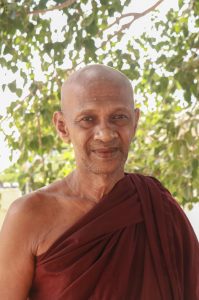 “My first day at work as a kitchen apprentice was quite memorable. We had to prepare a massive biriyani order and it would have been at least 500 packs. I was tasked to grind two big bags of dried chillies and grate 150 coconuts manually, using a coconut scraper. That was the test the hotel owner put me through to offer a job at this hotel. I completed the task and got the job.”

Dhammalankara Thera said that he worked on film sets and had cooked for many famous actors and musicians at the time. Later, he had switched jobs and had done several labour-intensive jobs.

The thera’s mother was a keen follower of Buddhism and had been his first Dhamma teacher; she had shared the little Dhamma knowledge she had with him.

“My mother always said that she wanted to see one of her children ordained. My sister became an active political figure in the area at the time. So it was I who had to choose the path of a monk at some point.”

The thera recalls how he had enjoyed the many vices as a layman at the time, and was married and lived a family life. As years passed, he had gradually realised how vain his life was. “I thought about what my mother always said and one day, I informed my younger sister that I intended to be ordained to fulfil my mother’s wishes.”

The monk recites the Vishwa Shanthi Bodhi Pooja, invoking healing to the people, and said that he has been able to assist thousands of people heal from various ailments. Today, not only Buddhists but also many families of the Hindu faith come to the Lumbini Viharaya to receive blessings from Dhammalankara Thera. He said that regardless of their faith, he would hold Bodhi poojas for all of them and channel the blessings to the children and adults as well.

Dhammalankara Thera spends most of his time reading the scriptures and meditating, and like many of the monks who spend a lot of time meditating, he has developed his state of mind to a point where he has been able to predict world events.

He said that he had foreseen the terror attacks that took place in April 2019 and had shared his prediction on 19 April, just three days before the Easter Sunday attacks had taken place. However, he noted that he does not want to be used as a tool for predictions as such and, even if he would foresee any major events, is not keen on sharing it with media outlets.

“This Bodhi has so much power to it that when I meditate under its shade, I feel the connection to the source of everything. I understand why Gautama Buddha selected various Bo trees to meditate. What is interesting about this tree is that during the height of the war between 2008 through January 2009, many of the buildings around this area including the temple structures had been destroyed but the tree miraculously stood unharmed,” Dhammalankara Thera elaborated.

As we asked permission to depart, the thera was kind enough to share a sermon and invoke blessings for our long journey on the road, noting that it was a pleasure to have our team at his temple during this pandemic.

June 6, 2021 byNews Admin No Comments
Despite three Covid-19 waves, Sri Lanka’s free trade zones (FTZ) have been on full throttle, helping keep the country’s economy afloat. However, several unions have accused the factories within these

January 5, 2022 byNews Admin No Comments
A Seoul court on Tuesday (4) afternoon temporarily blocked the vaccine pass mandate at educational facilities, saying the policy “seriously disadvantages people who are not vaccinated”.