Heat to continue till 2 Sept

August 27, 2020 by themorningeditor1 liberty No Comments 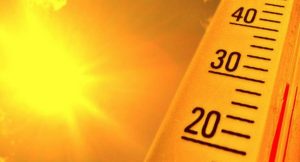 The Department of Meteorology forecast that the hot weather the country is experiencing at present will prevail till 2 September, with temperatures increasing from 35-40℃ in the North, North Central, East, and Uva Provinces.

The probabilistic temperature forecast for the August, September, and October season (ASO) 2020 for Sri Lanka issued by the Centre for Climate Change Studies and Research Division, considering the prevailing global climate conditions, forecasts from different global climate models (GCM) and statistical downscaling of output using the “climate predictability” tool. The consensus forecast for August to October 2020 concluded that there would be near or little below-normal rainfall over Sri Lanka for the ASO season.

There is no clear signal over Sri Lanka for the month of October and it indicates that there are equal chances to receive below, about, or above-normal rainfall during October 2020. However, the possibility for below-normal rainfall is higher, if La Nina is developed.

In addition, the predictability is also limited due to strong day-to-day atmospheric variability caused by the passage of the synoptic scale systems such as lows and depressions, etc. and intraseasonal oscillations such as Madden Julian Oscillations (MJO).

Chain-snatchers on the prowl islandwide

April 22, 2021 byNews Admin No Comments
Incidents of chain-snatching along with the incidence of a racket involving the faking of accidents for monetary gain are on the rise, The Morning learnt.

We must relentlessly fight terrorism – UN

April 21, 2020 byTSM Web Desk No Comments
In a message to remember the victims of the Easter Sunday attacks the United Nations said Terrorism should not be associated with any religion, ethnicity or race.