The diversification of exports is often considered a primary objective in both developed and developing countries, helping them achieve economic growth. 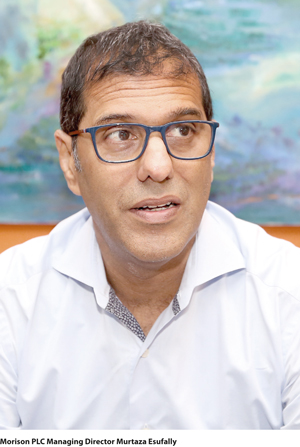 Unfortunately, Sri Lanka’s export basket has been stagnant for decades, relying solely on traditional exports like plantations products and apparel.

While having recently added software to that list, Sri Lanka’s export portfolio still has a lot more room in terms of export diversification.

Hemas Holdings PLC, one of the Sri Lanka’s leading pharmaceutical manufacturers, is now looking towards diversifying the country’s exports with its latest European Union (EU)-certified manufacturing plant in Homagama, which is geared towards catering to more international markets.

Morison PLC, a fully owned subsidiary of Hemas, Managing Director Murtaza Esufally stated that with the growth of the industry and the Government’s aid to support locally manufactured pharmaceuticals, the group felt the need to build a new plant that would also help with entering the Sri Lankan export market.

According to Esufally, the ground breaking of this plant took place on 15 July 2017, and they have currently completed a 100,000 sq. ft. building on the five-acre land. He explained that they are currently in the process of installing the machinery and conducting the electrical work, and hope to start working on trial batches for process validation by February 2020.

Esufally explained that this plant is a way of propelling Hemas to getting a foothold in the global manufacturing supply chain, by adhering to the high standards set by the EU certification they hope to obtain.

“The level of quality and automation in this plant will be quite high because we are trying to achieve this EU standard that requires a very robust quality assurance and quality management system.”

He stated that since the pharmaceutical industry is a high capital-intensive industry, the investment made in the plant was high, reaching almost Rs. 2.9 billion. This investment also involves the hiring and training of around 150 staff skilled in pharmaceutical manufacturing, engineering, quality assurance, production, and environment standards.

Esufally explained that besides the training, the company is giving its employees exposure, in the form of, for example, foreign consultations and educational trips to countries like India, in order to improve their skills and ensure they are able to use this plant to generate the output and maintain the quality standards required internationally.

He went on to state that even with the training of the employees and installation of new machinery, the hardest part of setting up the new plant is obtaining EU certification.

The EU certification authorities go through an extensive process of studying and understanding all the manufacturing plant documents and processes, and interviewing all its employees in order to see if the plant can adhere to their stringent standards.

He stated that the increase in quality standards can also be seen when it comes to the domestic market, leading pharmaceutical plants to increase the quality of air, water, and its processes.

“Most certifications require that various tests be conducted for quality assurance and quality control, in order to assess if the plants are applying these high standards consistently. So basically, you write what you’re doing and you must do what you write.”

Esufally stated that around 50% of the plant’s production will be for the local market, which is their main business, where they will be supplying to both the public and private sectors; another 30-35% will be for contract manufacturing to regional companies that supply to Sri Lanka. After establishing itself in contract manufacturing, he stated that the plant will look into exporting the remaining 15% of production to international markets.

“It takes a long time to export pharmaceuticals, because we have to get approvals from regulatory authorities. But for the moment, we are exploring potential markets, trying to pick which product fits which market.”

Esufally explained that another goal of the company is to cater to the local market through the Buyback Agreement which was renewed for another 10 years. The initial agreement was signed in 2014 between the local pharmaceutical manufacturers and the Ministry of Health, and is currently entering the initial agreement’s end stages, in 2019.

This agreement allowed local manufacturers a guaranteed buyback of whatever they produced at specified prices for use by government hospitals. According to Esufally, during the last five years, because of the agreement, local manufactures in the market grew from 4-14%. He went on to state that while this was helping local manufacturers, it also benefited the Government by giving them a smooth supply of good-quality pharmaceuticals at a very low cost.

“From the Government’s point of view, when importing pharmaceuticals, they have to visit these plants abroad and inspect them, and it’s also very difficult to track which plants certain products are coming from since there are around 25,000 of them. They also get the pharmaceuticals they want, when they want it, so they don’t have the hassle of storing any excess shipments that come into the country.”

According to Esufally, the main reason the Government signed this Buyback Agreement was to upskill the people in the industry and help build local manufacturers’ capabilities. He also mentioned that the Government made it possible to register local products faster, making the registering of new products much easier.

However, speaking from a taxation point of view, he stated that there is still room for improvement as the local manufacturers have to pay PAL (Port and Airport Development Levy), while the companies that import pharmaceuticals are exempt. He also stated that the construction cost for a pharmaceutical plant in Sri Lanka is much higher than it would be in India, as 90% of what they use for construction comes from India, and so the duties tend to be very high.

He explained that despite this, the Government was still promoting more locally manufactured pharmaceuticals, leaving enough room for all 12 local manufacturers.

Esufally stated that currently, Hemas has captured only about 14-15% of the local pharmaceutical market, and stated that this new plant will stand out due to its sheer size, the EU certification, and its fully automated and high productivity levels.

Another aspect of the new plant that would make it stand out from the rest is the fact that it is a zero-discharge plant, meaning that whatever is left over from production is treated and reused. Esufally explained that these leftover liquids will be mainly used in the cooling towers of the air conditioners or used as flushing liquid.

He stated that other sustainable practices that will be initiated in the plant include rainwater harvesting, training employees on the concept of cleaner production, and efficient resource usage. The plant will also install more energy-efficient machinery which includes capacity banks, load demand compressor systems, inverter-driven chiller systems for cooling systems, and boiler heat recovery systems.

Esufally stated that following these implementations, the plant will be open for commercial operations in the end of 2020, working simultaneously with the one in Mutwal. He went on to state that the company is hopeful that getting new business will lead to the new plant running at full capacity.

“I hope we won’t be the only ones who are looking to export internationally, because we cannot build an international business with just one good company; you need a critical mass of manufacturers – that is what attracts people to come here.”

December 17, 2021 byNews Admin No Comments
The steps taken by the Government so far to address the existing external sector issues, including the six-month road map, have yielded very little progress, and consequently the country is left with