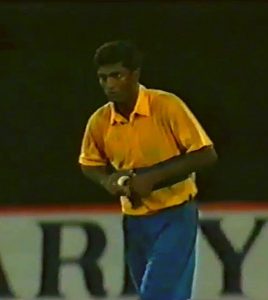 Young Muttiah Muralitharan bowls against India in Colombo in the latter’s 1993 bilateral series in Sri Lanka that year. This 12 August ODI at R. Premadasa was the off-spinner’s ODI debut and a start of an illustrious career

The first ever bilateral ODI series between India and Sri Lanka on Lankan soil was played in 1985. India, who were the reigning world champions of the format were led by Kapil Dev while Sri Lanka, very much the minnows of world cricket then, were captained by Duleep Mendis.

The first match at the Singhalese Sports Club saw Sri Lanka score 241/6 while batting first with Roy Dias (80) and a young Arjuna Ranatunga (64) leading the charge. India chased the target down in the 45th over with opener Ravi Shastri scoring a patient 67 while Dilip Vengsakar top scored with 89.

The second ODI was a rain curtailed affair with the match being reduced to 28 overs a side. Ranjan Madugalle’s 39-ball 50 propelled the Lankans to 171/5. Vengsarkar’s 46-ball 50 ignited hopes of an exciting chase but the Indians eventually fell short by 14 runs. The last match of the series was washed out but not before the Indians had the hosts on their knees at 32/4, while chasing 72 runs for victory in 15 overs. The series was drawn.

The three-match series saw Mohammed Azharuddin’s India go down to a rejuvenated Lankan side under the leadership of Arjuna Ranatunga, despite winning the first match. The opening tie saw Azharuddin slam a half-century (53) to guide the visitors to 212/8. Opener Chandika Hathurusingha held the innings together with a painstakingly slow half-century (64 of 121 deliveries) while Aravinda de Silva’s knock of 62 made the match a thrilling affair. Javagal Srinath and Manoj Prabhakar picked up a wicket in the last two overs to help India sneak through and win by a solitary run.

The second ODI saw India win the toss and elect to field first. The Lankans managed a below par 204/7 on a sluggish pitch with skipper Ranatunga lead the charge with a feisty half-century (50). Manoj Prabhakar (86) and Mohammed Azharuddin (62) held the Indian innings together, but a three-wicket burst from Pramodya Wickramasinghe ensured the hosts won by 8 runs and levelled the series.

The series decider was played at Moratuwa with India deciding to bat first after winning the toss and putting up a fighting 227/9 on the board, with skipper Azharuddin leading the charge with a classy knock of 85 runs. India’s dreams of winning their first bilateral series were dashed as Lankan opener Roshan Mahanama starred with a knock of 92 at the top of the order. He was supported ably by the middle-order batsmen as the hosts chased down the target with three balls to spare and won the series.

Sri Lanka’s dominance over India in ODIs continued as they swept the series 3-0. It was an in form Lankan team, fresh from winning the World Cup in 1996 which had sent shock waves through the world of cricket. The Lankans batted first in the opening match of the series and a Sanath Jayasuriya blitzkrieg (73 off 52 balls) set the tone of the duel. Marvan Atapattu held the innings together and scored a classy century (118) and a quickfire half-century by Roshan Mahanama (53) helped the Lankans post 302 on the board. India started well with the opener Sachin Tendulkar (27) and Sourav Ganguly (31) putting together a 58-run stand but a flurry of wickets all but ended their hoped. Mohammed Azharuddin (111) and Ajay Jadeja (119) started a brilliant rearguard and put on 223 runs for the fifth wicket, but their efforts went in vain as the Lankans edged the visitors by 2 runs.

A Sourav Ganguly century (113) was the centerpiece of India’s innings in the second ODI as they scored 238 while batting first. But the strong Sri Lankan top order ensured India never had a chance to win the match. Half-centuries from Jayasuriya (66), Mahanama (66) and Aravinda de Silva (52*) helped the Lankans reach the target with 8.1 overs to spare.

India had a great chance to win the third ODI after they score 291 runs while batting first, with Robin Singh scoring his maiden ODI century (100). The Lankans were on the ropes at 132/6, despite a Jayasuriya special (68 off 38 balls) but torrential rains meant the match was called off. The match was replayed and the Lankans scored 264 with Aravinda de Silva scoring a century. India would go on to lose the match by 9 runs to end a torrid series.

One of the most ill-fated series between the two teams with all the three matches getting washed out due to rain. Only 3.4 overs were bowled in the first match while the other two matches were abandoned without a ball being bowled.

Mahendra Singh Dhoni led India to their first ever bilateral series win on Lankan soil as India got the better of the Lankans in a five-match series. The hosts outplayed India by 8 wickets in the opener with Ajantha Mendis and Muttiah Muralitharan picking up 3 wickets each to the bowl India out for 146.

The Indians hit back in the second ODI by bowling the hosts out for 142, with Zaheer Khan (4/21) and Praveen Kumar (3/34) doing the damage. India were struggling at one point at 75/5, but a crucial partnership between MS Dhoni (39) and Subramanium Badrinath (27*) saw the visitors through with 3 wickets in hand.

India batted first in the third ODI and half-centuries from Suresh Raina (53) and MS Dhoni (76) guided the visitors to 237/9. A valiant knock of 94 by Mahela Jayawardene kept the Lankans in the game but were eventually bowled out for 204 as India took the lead in the series.

MS Dhoni’s men wrapped up the series in the 4th ODI. Half-centuries from Virat Kohli (54), Suresh Raina (76) and MS Dhoni (71) propelled India to 258 all out. Jayasuriya turned the clock back with a 52-ball 60 at the top of the order, but a three-wicket haul by Harbhajan Singh ensured India won the match by 46 runs.

The Lankans picked up a consolation win in the final ODI by bowling the Indians out for 103, after managing to score 227 while batting first.

MS Dhoni led India to back to back series wins, when his team steamrolled the Lankans 4-1 in their own backyard. A Jayasuriya century (107) in the first ODI guided the hosts to 246, India chased down the target with 11 balls to spare. Gautam Gambhir (62), Suresh Raina (54) and MS Dhoni (61*) doing the job for the ‘Men in Blue’.

India made it 2-0 after winning the second match by 15 runs. Yuvraj Singh top scored with 66 as the visitors put up 256/9 on the board. A four-wicket burst from Ishant Sharma meant Thilina Kandamby’s unbeaten 93 went in vain.

The third ODI was a run fest for the visitors with Virender Sehwag (116) and Yuvraj Singh (117) leading the charge. A cavalier unbeaten 59 off just 38 balls by Yusuf Pathan helped India post 363/5 in 50 overs. Kumar Sangakkara tried his best with an 82-ball 83, but a four-wicket haul by Pragyan Ojha gave India a huge 147-run win which helped the visitors take an unassailable lead.

India breached the 300-run mark in fourth ODI as well, Gautam Gambhir (150) and MS Dhoni (94) doing the damage primarily as the visitors piled up 332/5 on the board. Sri Lanka were never in the chase as they lost wickets at regular intervals and were eventually bowled out for 265.

Sri Lanka finally had something to smile about as they won the final ODI by 68 runs after scoring 320 runs on batting first.

MS Dhoni once again guided India to a series victory, with the visitors winning 4-1 yet again. The first ODI saw Virat Kohli slam a majestic century (106), while Virender Sehwag was unlucky to miss out on one as he was dismissed for 96, with India putting 314/6 on the board. Sri Lankan were kept in the game with a brilliant 133 from the blade of Kumar Sangakkara, but the Lankans eventually lost the match by 21 runs.

The hosts came back strong and tied the series by winning the second ODI by 9 wickets as India were bowled out for 138. Angelo Mathews and Thisara Perera picking up three wickets each for the Lankans. Upul Tharanga (59*) and Tillakaratne Dilshan (50) got the job done for the hosts.

Sri Lanka batted first in the third ODI and put up 286 runs on the board, thanks mainly to half-centuries from Sangakkara (73), Jayawardene (65) and Angelo Mathews (71*). India had a stiff target to chase they reached home with 2 balls to spare. Gautam Gambhir laid the foundation with a century (102), while an unbeaten 45-ball 65 from Suresh Raina took the visitors home.

The series was sealed in the 4th ODI as Manoj Tiwary’s part-time spin led to a middle order collapse after the Lankan top order had started well. The Lanakan posted 255 on the board, which was chased down in 42.2 over by India, thanks mainly to an unbeaten 119-ball 128 by Virat Kohli, who showed first signs of being the great chase master that he would go on to become.

India made it 4-1 by winning the final ODI. The in-form Gautam Gambhir’s 88 at the top of the order guided India to a mammoth 294/7 in their 50 overs. Irfan Pathan thenpicked up a 5-wicket hauls as India won by 20 runs.

Simona Halep knocked out by Kaia Kanepi in first round

August 28, 2018 byMalik No Comments
World number one Simona Halep became the first top-seeded woman to lose in the US Open first round, falling to a 6-2 6-4 defeat against Kaia Kanepi.

July 31, 2021 byRevatha No Comments
Springboks need a win to stay in