Honouring International Day of the Victims of Enforced Disappearances

September 1, 2021 by Venessa Anthony No Comments 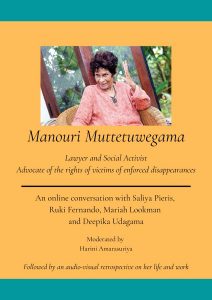 The International Day of the Victims of Enforced Disappearances is held on 30 August in order to recognise the courage, commitment, and determination of families and victims from all communities, who, despite many challenges, have continued to voice their demands for justice and answers about the fate of their missing loved ones. According to the Amnesty International organisation, although Sri Lanka has one of the world’s highest numbers of enforced disappearances, with a backlog of between 60,000 and 100,000 disappearances since 1980, the authorities have failed to both protect and provide justice to families of the disappeared.

Enforced disappearance deprives families and communities of the right to know the truth about their loved ones, of accountability, justice, and reparation. They experience mental anguish, alternating between hope and despair, wondering and waiting, sometimes for years, for news of the whereabouts of their loved ones. The families and friends of the victims also live with the insecurity that the search for the truth may expose them to danger. The feeling of insecurity generated by unresolved enforced disappearances is not limited to the close relatives of the disappeared, but also affects their communities and all of society.

Enforced disappearance has frequently been used as a strategy to spread terror within the society. The feeling of insecurity generated by this practice is not limited to the close relatives of the disappeared, but also affects their communities and society as a whole.

Starting off the webinar, Member of Parliament Dr. Harini Amarasuriya spoke about how rituals to honour the dead and cope with the passing of a loved one are now no more, in these unpredictable times. In some cases, the body is not able to be seen by even the closest family. “These kinds of events are helpful and go some way in filling that void that most of us feel once a loved one is no more,” she added. Muttetuwegama’s life touched many, but as Dr. Amarasuriya described, what was unique about her was her ability of making people feel special. It is fitting that the celebration of her life is held on the day she was most passionate about, having dedicated her life to and working towards eradicating enforced disappearances and helping those affected.

The webinar also recollected the many influences her life has had, and walked down the numerous paths she took; be it law, human rights, or politics.

The victims of enforced disappearances are frequently tortured and in constant fear for their lives. They are well aware that their families do not know what has become of them and that the chances are slim that anyone will come to their aid. Having been removed from the protective precinct of the law and “disappeared” from society, they are in fact deprived of all their rights and are at the mercy of their captors.

Manouri Muttetuwegama would once recollect in an interview that forcible disappearance of loved ones is the “most inhuman and heinous crime” where even the right to pay last respects was taken away from relatives. She charged that it could not be dismissed as a mere ethnic issue.

It is women who are most often at the forefront of the struggle to resolve the disappearance of family members. In this capacity they may suffer intimidation, persecution, and reprisals. As professor, academic administrator, and human rights activist Deepika Udagama highlighted during the webinar, Muttetuwegama, the human rights activist and one of the earliest Sri Lankan women to take up criminal law, could relate easily to the heartbreaks of fellow women. She would not hesitate to remind the world that “women’s rights are human rights” too.

Even if death is not the final outcome and the victim is eventually released from the nightmare, the physical and psychological scars of this form of dehumanisation and the brutality and torture which often accompany it, remain.

The families and friends of the victims are also affected and experience slow mental anguish, not knowing whether the victim is still alive and, if so, where he or she is being held, under what conditions, and in what state of health. They alternate between hope and despair, wondering and waiting, sometimes for years, for news that may never come. In addition, they are well aware that they, too, are threatened, that they may suffer the same fate themselves, and that searching for the truth may expose them to even greater danger.

As the world marks the International Day of the Victims of Enforced Disappearances, justice is further away than ever in Sri Lanka.

The art of soap making: Rishada Fausz on her brand Suds & Co.

June 10, 2021 byNews Admin No Comments
Soap making, especially when made at home, is quite a tedious task. Yet, looking at the pretty swirls and patterns you’ve created, just by using your own hand is rewarding in its own way. After much p

The system has failed

July 28, 2021 byNews Admin No Comments
It is said that justice is blind. Since the 16th Century, Lady Justice has been illustrated in a blindfold, as the penultimate symbol that represents impartiality, the allegorical personification of a