How the International Monetary Fund adds fuel to Covid-19 fires 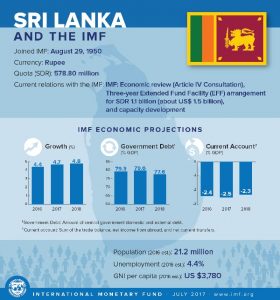 The Covid-19 pandemic hit Sri Lanka at a very difficult period in its economic history. Since around 2012, the country’s GDP growth rate has continuously plummeted, manufacturing output has flatlined, and external debt stocks as a percentage of GNI has reached highs not seen since the mid-1990s.

In 2016, the country entered into an agreement with the International Monetary Fund (IMF) to borrow 1 billion in Special Drawing Rights (SDR; an international reserve asset) as part of an Extended Fund Facility (EFF). Policy makers justified this on the grounds that growing debt and flagging growth made an IMF bailout necessary. Predictably, the IMF issued a set of conditions, namely to reduce the fiscal deficit by lowering government spending and increasing taxation. The currency was devalued. Imports were liberalised. Subsidies on fuel and fertiliser were withdrawn. Interest rates were jacked up in a bid to rein in inflation. Did it work?

Well, the growth rate between 2016 and 2019 (the period of the IMF agreement) declined from 4.5% to 2.3% – the average for the period was 3%. Unemployment rose from 4.4% in 2016, to 4.8% in 2019. Inflation spiked to 7.7% in 2017. Throughout this period, manufacturing output showed no growth. External debt to GDP continued to increase – fuelled by issuances of international sovereign bonds worth $ 10 billion in these three years alone. 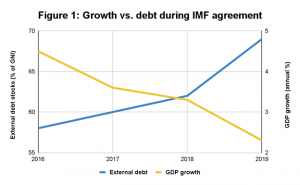 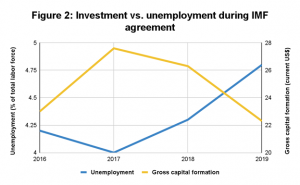 The IMF agreement did not bring about growth, investment, employment nor reduce external debt. However, it did achieve a primary budget surplus of Rs. 2 billion in 2017 and Rs. 91 billion in 2018. This appears to have been managed not necessarily through “fiscal discipline”, but by withholding payments to public and private contractors and suppliers.

According to the Finance Minister’s 2020 Budget Speech, there were outstanding unpaid bills amounting to Rs. 243 billion. This includes Rs. 23.9 billion for fertiliser, Rs. 31.4 billion for medicine, Rs. 119 billion for construction contractors and suppliers, Rs. 45.8 billion for elder’s interest subsidy and Rs. 22.1 billion in payments owed to various Government Ministries and Departments.

This ‘austerity’ helped the Government present a primary budget surplus in order to meet the IMF’s conditionality. In turn, unpaid contractors and suppliers would most likely have faced severe cash flow issues, forcing them to take on debt at the prevailing high interest rates of the time, and cut down staff – thereby increasing unemployment. In this context, it is unsurprising that the country was embroiled in strikes and protests.

The IMF agreement was discontinued after November 2019, and a mere four months later, Sri Lanka would have its first taste of the Covid-19 pandemic. Much of the pre-existing economic symptoms were intensified by this external shock, concerns were raised over debt repayments, and calls to go back to the IMF for a fresh bailout package were renewed.

The IMF and Covid-19 double-whammy

This raises the question: what would IMF conditionality, disastrous as it was from 2016 to 2019, do to a developing country like Sri Lanka amid an unprecedented global pandemic and recession? A paper titled “Adding Fuel to Fire: How IMF demands for austerity will drive up inequality worldwide”, published by Oxfam in August, holds a few answers.

Analysing 107 Covid-19 related loan agreements negotiated between the IMF and 85 governments from March 2020 to March 2021, Oxfam found that 85% of the agreements encouraged austerity (reduced government spending), after the immediate threat of the health crisis, thereby jeopardising long term growth and recovery.

The analysis found that The IMF has proposed cuts and/or freezes in public sector wages in 31 countries, increases in value added tax in 14 countries, and cuts in general public expenditure in 55 countries. So far, 26 governments, mainly in Africa, Latin America and the Caribbean had plans to implement fiscal consolidation following IMF loans, some as soon as 2020 and 2021.

Oxfam raises the concern in the report that “Austerity measures, including wage cuts, cuts to social spending and rationalising social assistance programs, directly contradict SDG 10 insofar as their effects are most severely felt by women, low-income households and those who are vulnerable”.

The report goes on to say that, “austerity measures in the post-pandemic period may cripple recovery efforts. In addition, regressive measures that typify austerity push the burden of recovery onto poor people and the middle classes, while requiring little responsibility or contribution from rich people who have already recovered from the pandemic”.

Indeed, Oxfam argues – not without reason – that one of the reasons the Covid-19 pandemic has hit underdeveloped countries so hard is due to under investment in state capacity and social services at the behest of IMF mandated fiscal consolidation. One could add that the adoption of laissez-faire trade policy based on comparative advantage is also to blame, as industrialised nations like China, Japan and South Korea have been able to mobilize resources against the pandemic far better than tourism and services dependent countries like Sri Lanka.

If the period from 2016 to 2019 isn’t proof enough that the IMF doctrine doesn’t work, it’s worthwhile looking into how it has affected countries simultaneously grappling with the Covid-19 pandemic.

Angola is a southern African nation, where oil makes up around 90% of exports and a third of government revenue. Economic and social stability depends largely on global oil prices, which dropped in 2014, causing the economy to contract for five consecutive years, and debt to rise to 120% of GDP by 2020.

The country entered into an IMF loan agreement in 2018. Bloomberg reports that, “As part of the IMF program, Angola has pledged to sell 195 businesses or stakes, including partial holdings in national oil company Sonangol and diamond firm Endiama, to boost its public finances and reduce the role of the state in the economy. The government also aims to remove fuel subsidies and increase public transport tariffs ‘once the pandemic subsides’.”

Unlike Sri Lanka, Angola has chosen to stick with its IMF reform programme amid the Covid-19 pandemic. Subsidies on fuel have been cut. Annual inflation has hit around 25% according to The Economist. The rising cost of living and high unemployment has sparked a wave of strikes and protests similar to what Sri Lanka experienced between 2016 and 2019, but with a far bloodier crackdown.

Tunisia is a fairly diversified economy whose main foreign currency earners are tourism and exports of manufactured electronics. However, it runs a trade deficit of around $ 5 billion. The country’s GDP declined by 8.6% in 2020 amid the pandemic, as tourism came to a standstill. Unemployment, which stood at a very high 14% before the pandemic, spiked to 17% in 2020. Youth unemployment was even higher at 36%. Government debt reached 88% of GDP.

In April 2020, amid the onset of the pandemic, the country entered into a Rapid Financing Instrument (RFI) agreement with the IMF to borrow $ 745 million as emergency relief. Tunisia ran a fiscal deficit of 11.5% in 2020 and the IMF in February warned that the deficit could be around 9% – greater than the government’s official target of 6%. The IMF then prescribed a specific set of actions including cutting public sector wages and energy subsidies amid the pandemic.

This has been recommended while the country grapples with a wave of youth protests over rising unemployment. Naturally, Covid-19 intensified Tunisia’s pre-existing problems, and the IMF’s recommendations are likely to add fuel to the fire, as cutting subsidies will increase the cost of living and cutting public wages will reduce the purchasing power of households.

Kenyan citizens have taken to the streets in protest and petitioned the IMF to cancel a $ 2.34 billion Extended Fund Facility signed with the government in May. Online hashtags like #StopLoaningKenya and #StopGivingKenyaLoans have proliferated in Kenyan social media since May, and protests have been picked up by Western media too. 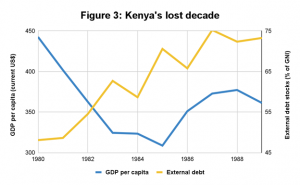 This is because Kenyans remember the IMF’s structural adjustment programmes in the 1980s, when the country drew on no less than seven different agreements. The conditionality caused massive lay-offs in the public service and removed subsidies in essential services including healthcare and education, hurting the most vulnerable groups in the society. Many development economists refer to this period as a “lost decade” (Figure 3) not just for Kenya, but for most sub-Saharan African countries embroiled in IMF programmes.

Like Sri Lanka, Kenya is deeply indebted to international capital markets, which it has borrowed from to bridge a yawning trade deficit. The country has already lost two million formal jobs due to the Covid-19 pandemic, and has had a rate of investment well below global and regional standards for the past three decades. In light of these conditions, full implementation of IMF-style fiscal consolidation will be unlikely to provide long term growth and reverse the trend of low investment in Kenya. Higher taxation and interest rates will only shrink profits further and throttle long-term growth and recovery.

An alternative is possible

Sri Lanka has recently been rocked by a wave of protests, largely by public sector workers such as teachers, doctors and nurses demanding better wages and working conditions. Meanwhile, consumers have been complaining of rising food prices, exacerbated by loss of income due to the pandemic. Indeed, global food prices have reached record highs in the last few months.

This has happened despite the Government running a budget deficit to maintain spending on essential social services such as healthcare and education at their pre-pandemic levels. Consumption taxes like VAT have been removed. One can only imagine the social instability that would be unleashed if the government adopted aggressive IMF-style fiscal consolidation, cutting back on essential services, and withdrawing subsidies on goods like fuel even further. Households would be squeezed, and thousands more plunged into poverty and unemployment. Protests and strikes would bring the economy to a screeching halt.

Sri Lanka has resorted to IMF bailouts no less than 16 times in its history (Table 1), yet the standard prescription of fiscal consolidation (reduced Government spending and increased taxation) and inflation-targeting monetary policy (raising interest rates and restricting money supply to combat inflation) has failed to fundamentally change the structure of the economy.

An alternative to the IMF doctrine is possible. For example, rationalising imports (like vehicles which accounted for 5% of import costs between 2016 and 2019), has helped save foreign currency and avoid default. Meanwhile, low and stable interest rates are needed to reduce the cost of production and increase global competitiveness, while encouraging money holders to invest rather than hoard savings in bank accounts. However, proper mechanisms such as state-mandated lending targets are needed to ensure that credit is pumped into productive investment in the real economy. Rather than devaluation, a stable currency is desirable to allow for imports of investment goods.

As Oxfam says, “At this critical juncture, governments can either choose to continue down the same path and fuel this increasing inequality or take the necessary redistributive measures and fund recovery through progressive efforts to reduce inequalities”.

(The writer is a Global Macro Research Analyst at Econsult Asia, which is an economic research and management consultancy firm with an alternative development outlook)

The dangers of going to the IMF

March 7, 2022 byNews Admin No Comments
Since 1965 Sri Lanka has approached the IMF 16 times in its history, roughly about once in five years. We have approached the IMF on various issues such as tax structures, balance of payments, and so

Sunny Side Up: Dog days not over?

April 30, 2022 byNews Admin No Comments
Some of the ruling party members who have now declared independence in Parliament are now left to find their own housing and transport modes after relinquishing their positions in the Government.