How to play series – Against TALLER players

November 29, 2020 by Nethmi Liyanapathirana No Comments 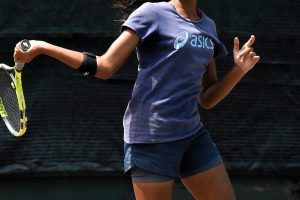 In this multipart series, it is hoped to discuss the tactics which can be used against specific types of players.

Whilst the points mentioned here are by no means exhaustive, it is hoped that these points would form the foundation for players to flesh out their own tactics when confronted against such players.

In deciding on tactics against any player, the first and most important thing that needs to be understood is that tactics should be devised with the strengths of the player devising them, being at the forefront of the mind at all times. For the purposes of this discussion, it will be assumed that the player devising the tactics is proficient in playing all the shots.

Today’s discussion will centre on how to play against taller players.

What are the normal, specific strengths of a taller player? They can be listed as given below:

What normally would be the weaknesses of a taller player?

Now, before anyone starts picking them apart, it is hastily added that these are the “normal” strengths and weaknesses of a taller player. Of course, there would be different characteristics from player to player. That is always to be expected and anticipated at all times.

Addressing the first strength of a taller player in itself can be turned into a weakness. This is because taller players with good serves do not like the ball coming back much from their first serves. Therefore, the most important thing any player can do is to take a good look at the serve and return the first serve as much as possible. This can be done, for example, by taking one or two steps further back and getting better sight of the ball than you would normally do.

Have reach but not good movers

Also, although normally taller players have more “reach” than others because of their bigger wingspan, they are not very good movers. Therefore, another tactic which can be adopted is for the player to try to always move the opponent from side to side as much as possible, and then also try to hit the ball behind the opponent as well.

Taller players are also normally quite aggressive and don’t like long rallies. Therefore, the player needs to keep more balls in play but with a purpose. The purpose should be to move the opponent around as well as to hit behind the opponent. The “high” top spin is quite effective against taller players and would serve this purpose.

‘One size does not fit them all’

The slice should also be used during the baseline rallies as well, since it would force the opponent to hit a low shot which, as mentioned before, is not one of the strengths of a taller player.

All of the above tactics discussed is for the “stock” taller player. The players can decide which of the above would work against their particular opponents and use them accordingly. Once again the most important thing to remember is the fact that “one size does not fit all” in the game of tennis.

Judicial system : Heading for an overhaul

November 1, 2020 byCharindra No Comments
The Sri Lankan judiciary is well known for the pending cases piled up in its closet, which, according to statistics available, is estimated to be around 750,000 cases as at Sep 2016.