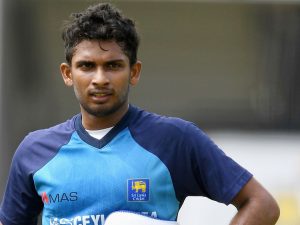 Dasun Shanaka was appointed as Sri Lanka T20I Captain in February and sacked from the position in May, even before he led the country at least in a single match! How was that?

About one and half years ago, he was considered a survivor. That was when he led a young team to a historic 3-0 clean sweep in Lahore in October 2019.

More recently –as recently as last January– he was appointed again as the national T20I Captain yet was to miss the immediate three-match series in the West Indies in March being unable to make the trip to the Caribbean due to an unexpected visa problem.

Now this survivor, the new national T20 Skipper Dasun Shanaka has allegedly been overlooked as the Captain for the forthcoming England tour even before he could lead the side at least in one match! The newly appointed ODI Skipper Kusal Janith Perera is to be given the reins of the national T20I team too, it is reported.

Following the said October 2019 Pakistan T20I series, the seniors returned to the side and the country played two away series and two home series thereafter. They lost all four.

Sri Lanka played Australia in Australia in October-November 2019 and lost 3-0 and then played India in India in January 2020 and lost 2-0 with one match being washed off. They then played the West Indies in Kandy to lose 2-0 in a two-match series before the outbreak of the pandemic. Sri Lanka then lost to the same opposition 2-1 in Antigua under an “ad-hoc Captain” in Angelo Mathews.

Lasith Malinga captained the side in the above first three series while Mathews led the side, only in absence of Shanaka, in the away West Indies series.

Shanaka was officially appointed as Sri Lanka T20I Captain on 22 February this year before the team’s West Indies tour.

He then replaced Malinga, who was understood to be out of contention for selection having not trained with the squad in the previous few months. Shanaka was handed the leadership role over, notably, Thisara Perera who had also led Lankans in the format before. Then Perera retired from international cricket on 3 May.

It should be remembered that the appointment had been made in February at a time when Perera had led the Jaffna Stallions franchise popularly for the inaugural Lanka Premier league (LPL) title victory, about two months before, in December last year.

In the meantime, Shanaka’s Dambulla Viikings had failed to reach even the final of the tournament held during November-December 2020. All this goes on to say that Shanaka’s appointment had a decent thought process behind it.

The point here is that Shanaka was appointed as Sri Lanka T20I Captain in February but now he has been overlooked in that position even before he captained Sri Lanka in at least in a single match!

On 9 April, former Sri Lanka fast bowler Pramodya Wickramasinghe was appointed as Head of a six-member selection committee to oversee selections. Romesh Kaluwitharana, Hemantha Wickramaratne, Varuna Waragoda, Uvais Karnain, and Thalika Gunaratne were the other members of the panel.

Before that, there had been a vacuum in terms of selection ever since Ashantha De Mel resigned as chief of selectors following Sri Lanka’s home Test series defeat by England in January. Following De Mel’s departure, the selection process was undertaken by Wickramasinghe and Chaminda Mendis, with the former even accompanying the Sri Lanka team on their tour of the West Indies in March as the selector-on-tour.

Getting support of the team 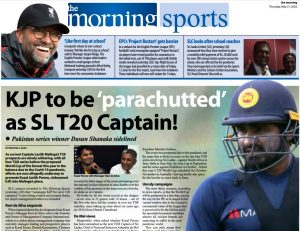 It was on 21 May last year, over one year ago, that The Morning Sports predicted this outcome. How was it?

It can be recalled anyway that whoever is going to captain Sri Lanka, he needs to be a “team man” not a “lone man”. Dimuth Karunaratne provide that timely “team atmosphere”. And in fact he was brought into that position in February 2019 by the De Mel-led committee mainly to unite an otherwise bitterly factionalised team. Sri Lanka turned tables in South Africa after his appointment.

What happened in October 2019 in Pakistan was something quite similar. As soon as Shanaka was made the Skipper of a young and row side –comprising the likes Shehan Jayasuriya, Minod Bhanuka, Angelo Perera, Bhanuka Rajapaksha, Lahiru Madushanka, Wanindu Hasaranga, Avishka Fernando, Oshada Fernando, Sadeera Samarawickrama, Lakshan Sandakan et al— they turned tables on the strong Pakistanis quite unexpectedly.

It is pertinent to observe whether the newly appointed Captain too can derive and command such unity and full support from his subordinates? May be or may not.

In fairness to Kusal Perera, he attempted in a gutsy manner in Bangladesh last week in the three ODIs but his sudden elevation to firstly as the national ODI Captain and now allegedly the national T20I Captain has already raised many an eyebrow. Concerns have been reported over the possible appointment within the team itself.

Is there an upper hand that is pushing Kusal Perera to the top? Is it his Manager? Is any such force having a close business connection with a higher-up of a highly powerful cricket advisory body at present? Perera’s Player Manager Ravi de Silva has categorically denied us his influence over Perera’s appointment as the Captain.

Then, is Kusal Perera appointed as Sri Lanka white-ball Captain purely on merit? Has Shanaka failed miserably in recent white-ball matches, mainly the ODIs, to keep him out of contention for the national captaincy? The authorities have to answer.

Otherwise, the ardent cricket fans in the country may feel that our cricket is a private business enterprise, not a national sport.

July 21, 2021 byRevatha No Comments
One of the most loved veterans among Sri Lanka’s sports journalists, Elmo Rodrigopulle passes away

October 12, 2019 byTSM Web Desk No Comments
As I write this typhoon Hagibis is lashing it's fury upon much of the South Eastern coast of Japan.