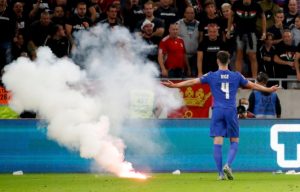 Hungary have been ordered, for the second time this year, to play two matches behind closed doors by the football world governing body FIFA yesterday (21) following the racism English players had experienced at the World Cup qualifier in Budapest on 2 September.

However, the second ground-closure is suspended for two years.

In June, UEFA had fined the Hungarian federation £ 85,500 (Rs. 23.3 m) and ordered a three-game stadium closure, the final match being suspended, for discriminatory behaviour by their supporters during Euro 2020.