‘I am a woman and my rights matter’

October 20, 2021 by Venessa Anthony No Comments

The issue of women’s rights in Islam has been a contentious area of discussion and intense debate, both in the Muslim world and in the West. The two dominant mainstream narratives have victimised Muslim women, though in different ways. On the one hand, many Muslims and Muslim governments appropriate Islamic text to justify discrimination against women and to impose social and legal restrictions on women’s rights and freedoms. On the other hand, Western islamophobic neo-orientalists use these popular yet traditional misogynistic readings of Islam to support their xenophobic claims against Islam and Muslims. 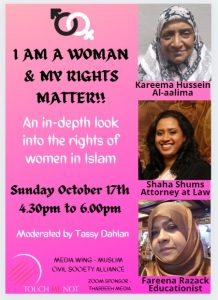 She further added that we saw gender-based inequality with the recent #MeToo movement where women in Hollywood who were sexually assaulted came out with their stories, pointing out that gender-based violence exists everywhere in the world.

Questioning certain factors that lead to gender equality, she stated that, since we still live in a patriarchal world, these factors will never be met, unless we change the mindset of the world. “Living today as Muslim women, we have to always re-read, re-learn, and refrom attitudes towards what rights we have,” Shums stated, adding that women need to keep studying in order to move forward.

She further added that about 1,400 years ago, Muslim women had the right of divorce, which was not heard of in other parts of the globe. “At that time, men were the custodians of women’s wealth, property, and income. Women have no say in what to do with their income, so they were under the dominant rule of their husband with no sense of income or value,” she said.

Shums stated that at the time, women were second-class citizens of their marriage and were not seen as equals, also noting that this is why we must encourage our daughters to keep going back to the books, so they can understand the sense of empowerment Muslim women had thousands of years ago, with the power that came with the ability to divorce that non-Muslim women weren’t privy too. Both men and women have equal rights in getting back together after a divorce, even though husbands are encouraged more to initiate than the wives, provided wives accept their husbands.

In a modern setting, women have more of a say in their expenditure and belongings in marriage, but there are also many cases of the husband wanting to take control over his wife.

Human beings in Islam have both material and spiritual characteristics. Islam does not accept the theory of evolution that human beings were created as apes. Human beings have two dimensions in Islam: One dimension is the highest one, the soul of God, and the other is the lowest, mud.

Speaker Kareema Hussein touched on the topic of whether physical duties and spiritual duties are the same for men and women in Islam. She explained that when comparing men and women in Islam, men are pysically stronger, but in terms of spirituality and intellect, men and women are equal. “In the Quran, it is said that men are physically stronger than women, which is why they are given the responsibility of maintaining and caring for the woman and her life,” she stated.

Clearly, men have stronger and bigger bodies than women, but they have less endurance than women. “Being fair, God also gave more responsibilities to men when it comes to physical and tough activities like going to war to defend their country or defending property, etc.,” Hussein stated.

She further added that Islam puts a lot of emphasis on a man’s love for his wife; if he was to put food on the table for her, it would be considered a meritorious deed.

Adding to this, Shums stated that in the Quran, both women and men are addressed equally, and it is not just addressed to men. “By mentioning men and women side by side, Allah reinforced that we are equal, and any good deed, if done with sincerity, will be rewarded equally,” she added.

December 29, 2020 byNethmi Liyanapathirana No Comments
Sri Lanka as an island is remarkably blessed with natural beauty and an abundance of wildlife. But there is a dark side to Sri Lanka’s natural identity. Over the last year, the island renowned..

April 8, 2019 bythemorninglk No Comments
Galle, as a travel destination, has become synonymous with casual strolls and late night drinks with friends amidst the ramparts of the Fort.