I am extremely honoured to bring pride to my motherland: Dr. Vajira Chitrasena

November 19, 2021 by Venessa Anthony No Comments

Dr. Vajira Chitrasena, a veteran Sri Lankan traditional dancer, choreographer, and teacher, is regarded as Sri Lanka’s first prima ballerina. Performing on stages in Sri Lanka and cultural capitals across the world, including Moscow, Berlin, New Delhi, London, and Sydney, Dr. Chitrasena was viewed as the epitome of the female performance and was referred to as the “prima ballerina of Kandyan dance”. She is the first Sri Lankan woman to practise the traditional Kandyan dance which was traditionally performed only by men. 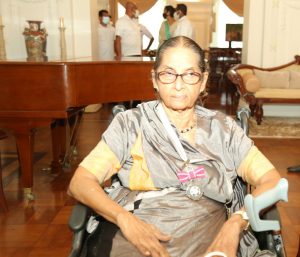 Histories of the tri-traditional dances of Sri Lanka – Kandyan, Low Country, and Sabaragamuwa – generally highlight a handful of pioneering women, point out their significance as the first female dancers on stage, and summarise their life stories. Dr. Chitrasena is actually credited for creating a brand for the female style of Kandyan dancing and setting the tone for women to become ritual dancers. On 26 January 2020, she along with late Prof. Indra Dassanayake was conferred with the Padma Shri award, which is one of the highest Indian civilian awards, coinciding with the 71st Republic Day of India.

Recently, she was recognised for her valuable contributions in the field of art, further strengthening India-Sri Lanka cultural ties. To honour her achievements, the High Commissioner of India to Sri Lanka handed over the Padma Shri award given by the Indian President to Dr. Chitrasena on Wednesday (17), in the presence of Prime Minister Mahinda Rajapaksa.

Dr. Chitrasena also served as teacher to successive generations of dancers, and at 89 years of age would probably be conducting classes, if not for the Covid-19 pandemic. Beyond teaching sections of the traditional repertoire as taught to her by her teachers, Chitrasena and Lapaya Gurunnanse (who was also Chitrasena’s guru), she developed her own pedagogy.

Brunch had a chat with her to learn more about her many years in the field and her thoughts on her recent achievement. 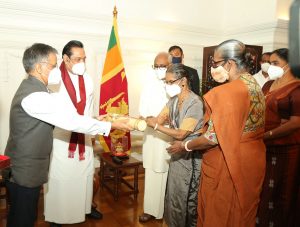 What inspired your entrance into the field of dance?

My entrance to the dance world was the idea of my mother and school teachers at Kalutara Balika who watched me during school performances. Later, when my family met Chitrasena at a performance at the Kalutara Town Hall, my parents invited him to our house for dinner. Subsequently, my mother encouraged Chitrasena to start dance classes in our house where a group of young girls and boys started learning from him. I was one of them who later became his star pupil. That was the beginning of my career as a dancer.

How did the Padma Shri award come about, and what were your feelings when you received it?

My daughter Upeka has been in close association with the diplomats of the High Commission of India in Sri Lanka, and it was she who co-ordinated with them and brought me the good news. I feel extremely honoured and happy to receive this prestigious award, which also brought great honour to my motherland.

Over the years, in your opinion, how has Kandyan dancing evolved?

The evolvement of the dance took many years; many traditional dancers came to the city for performances and Chitrasena went to watch these performances, where he was able to pick a well-known dancer and a guru Bevilgamuwe Lapaya Gurunnanse to be his teacher. So Chitrasena and myself were taught. We associated with this guru until he passed away.

What is your opinion on the field of Kandyan dance in Sri Lanka at present?

As Guru Chitrasena always said, “the dance is sacred”; I wish our traditional Kandyan dance forms continue to be sacred. However, it is somewhat disappointing to see this great art form being frequently used for commercial purposes and it is very seldom that we see a good stage performance.

So far, what has been the highlight of your career?

My performances since 1944 in many ballets created by the Chitrasena Dance Company and performing in many parts of the world and in Sri Lanka to distinguished guests.

Why would you say it’s important that children learn cultural aspects of their heritage such as dance?

I strongly feel that the present generation should be taught to appreciate our great cultural heritage in order to make them disciplined human beings.

What do you have in store for next year?

I am hoping that the pandemic period will be over soon and everyone can get back to their normal life. We too are eager to get back to new creations. For this I am thankful to my daughters Upeka and Anjalika and the three granddaughters Heshma, Umi, and Thaji, and also our capable senior student Kushan and the others who are helping me to carry on the work of the Chitrasena Kalayathanaya.

Would you like to leave a message for the next generation?

I wish to repeat Guru Chitrasena’s message, “the dance is sacred”, and it will remain for the future generations to come.

December 31, 2020 byNethmi Liyanapathirana No Comments
The pilot project underway to bring in tourists from some countries in order to test the country’s capability of handling flights and tourists amidst a pandemic is under public scrutiny again..

September 13, 2021 byNews Admin No Comments
Asian elephants once ranged from West Asia, through the Indian subcontinent, and all the way north to the Yangtze River in China. Today, there are less than 50,000 wild elephants found in only 13 coun