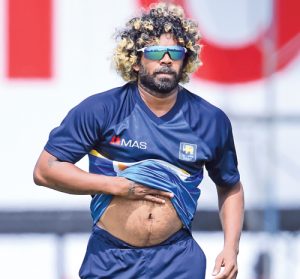 “I took four wickets in four balls against New Zealand. I was 37 years old then. Nobody complained anything about either my belly or my fitness that time.”

Sri Lanka’s foremost fast bowler in recent history, Lasith Malinga has said in a recent Youtube talk show with another former player Russel Arnold that he is not yet retired from international T20 cricket, also adding, “I can still bowl 24 balls.”

In a T20I match, one bowler’s maximum quota of overs is four, meaning a total of 24 balls.

“I can’t do the 2-km run (which is part of the present fitness test specified for the national players) but I still can ball for about two hours without any problem,” the ace slinger has added commenting on the current fitness eligibility for national selection.

“I can bowl 24 straight balls. I can even ball 200 balls. But because of the 2-km fitness test, I’m staying home. I know I can’t do that. Yet I took four wickets in four balls against New Zealand in Kandy last time. I was 37 years old then. Nobody complained anything about either my belly or my fitness level that time,” Malinga has argued.

January 17, 2019 byRevatha No Comments
Despite going winless on their tour of New Zealand, there were some signs of progress for Sri Lanka.

January 10, 2020 byRevatha No Comments
Australia legend Shane Warne auctioned his Baggy Green for AUD 1,007,500, with the proceeds going towards helping those affected by the fires ravaging Australia