My only worry was that I couldn’t fulfil my daughter’s dream. Nothing else. Former Sri Lanka fast bowler Dhammika Prasad said so yesterday (18). He said so announcing his retirement from international cricket at the Singhalese Sports Club (SSC) clubhouse, Colombo.

“I expected a call for the national side after I recovered from my shoulder injury. In fact I promised my daughter that I would play again for Sri Lanka after healing the injury. Not being able to do that is a worry,” Prasad told media.

“I first thank God, then my parents, my family, all my coaches and my physios, and all the members and patrons of my club (SSC),” he noted.

Also addressing the gathering, former Sri Lanka Captain Marvan Atapattu opined: “Prasad is a fast bowler who can bowl equally well at 10 in the morning as well as at five in the afternoon. Bad luck must have crossed his way.”

Prasad’s club mate, former ace spinner Rangana Herath said: “We two played for a longer time in the A side than being in the national side together. I can still remember he had an argument with Indian bowler Ishant Sharma in a Test in India. We really though the issue will have long repercussions. But Prasad was seen having a coffee with Sharma the same day evening. He is such a humble person.”

Prasad has taken 75 Test and 32 ODI wickets in a career spanned almost nine years since 2006. When retiring, he is the highest wicket taker (351 scalps) for SSC. He plans play for some more time for the Sri Lanka Navy cricket team. 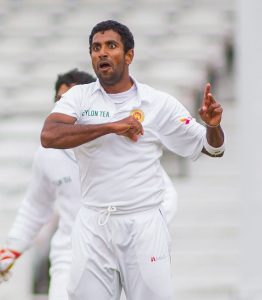 A high point in his career: Dhammika Prasad took five wickets in Leeds in June 2014 when England chased 350 to win. His figures of 5/50 helped Sri Lanka win by 100 runs and clinch the two-match series 1-0. Here he celebrates the fifth wicket that of Matt Prior

* Until 17 years, Prasad has played for his school chiefly as a top-order batsman

* When he is around 20, Prasad starts playing cricket for SSC

* In his ODI debut in 2006, Prasad took two wickets in as many balls in his first over, against Bangladesh

* Consistent performances on the domestic tournaments earned him his first Test cap, against India in August 2008

* He took five wickets in the match, including the wicket of India’s best batsman, Virender Sehwag, in both innings

August 28, 2018 byMalik No Comments
Swiss wildcard Stan Wawrinka beat eighth seed Grigor Dimitrov 6-3 6-2 7-5 in the first round of the US Open at Flushing Meadows in New York.