I have legitimate power over SJB: Diana Gamage

Last Thursday’s (22) debate over the 20th Amendment Bill, the vote that followed, and the manner in which certain Opposition Members of Parliament (MPs) voted in favour of it, seem to have baffled many.

The Sunday Morning this week spoke to Samagi Jana Balawegaya (SJB) National List MP Diana Gamage, who voted in favour of the 20th Amendment (20A), on her decision and what she had to say about the feedback that she is now receiving from her party. 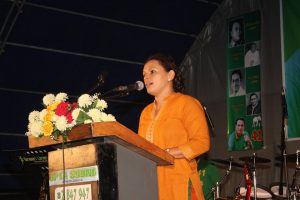 You voted for the 20A while your party decided to vote against it. Why did you do that?

We have experienced the worst of having a placeholder presidency, especially after what transpired over the past years. However, if the president has no power to make certain decisive decisions to safeguard the country, what is the point in appointing a president after spending billions of public funds? I firmly believe that, even as an Opposition MP, the right amount of support needs to be extended towards the ruling party, to govern the country.

We are, after all, here to do a public service. So when it comes to taking a decision, it should never be about the party’s best interest but whether it would be in the best interest of the country’s citizens.

This is why I voted in favour of the 20A. I believe that President Gotabaya Rajapaksa will not misuse the powers that are vested with him. He was a public servant and a high-ranking military officer before he became President. Is it not absolutely necessary that he is granted sufficient powers to take decisions over his citizens, given that he is now President?

Did you inform the party of your decision to support the 20A prior to the two-day debate or even before the vote on Thursday?

(SJB Leader and Opposition Leader) Sajith Premadasa was well aware of my decision. I had communicated my decision to support the 20A, so he should not act surprised.

By voting in favour of the 20A, have you not violated the party decision? Are you prepared to face disciplinary action?

The votes were called in as individual decisions. I exercised my right for the change that I believed in. If it comes to the party taking disciplinary action, I am ready to face the collective decision. There is a process that has to be followed; let’s see when it comes to that.

The SJB has said it will take disciplinary action against you. Since you are a National List MP, the party could remove you. Will you accept if the party decides to remove you from Parliament?

They are not in a position to remove me just like that; I am the Deputy Secretary of the party and the SJB was elected to Parliament because I allowed them to use the political party that my husband and I had established.

The party that was transferred to the SJB was originally the Ape Jathika Peramuna that was under you. Do you still hold legitimate power of the SJB?

Of course. I have legitimate power over the SJB; we have very strong by-laws governing the party. That means my husband, who is a Deputy Chair of the SJB, and I, have a say in the legal decisions that need to be made for the SJB.

Will you continue to support the Government in Parliament?

However, I will also make sure that they are kept in check and I would not shy away if they should be critiqued over their shortcomings.

Will you be joining the Government?

I do not have to necessarily join the Government to serve the people of this country. I am the District Organiser of the SJB for Vavuniya, and I have been given the opportunity to represent the people in Parliament this time; and whether I sit in the Government or the Opposition, what really matters at the end of the day is that I be given the necessary faculties to serve the people and address their issues at the policy level.

We are close allies, and yes, we talk frequently to discuss matters on how to improve the lives of the people of this country. I have always made it known that I am in support of President Gotabaya Rajapaksa’s vision to improve this country.

With the 20A now passed, I believe he has the necessary powers to take forward his vision.

How do you plan to steer your future political course?

I have no reason to leave the party that I founded. Whatever decisions I make in Parliament are always made with a lot of thought towards improving the livelihoods of this country’s people. If this Government or the ruling party fails to deliver on their promises to the people and misuse the powers that have been given to them, then come the next presidential election, they will appoint a different ruling party.

Hypothetically speaking, should that be an SJB-led government, then the decision that I made to vote in favour of the 20A, reinforcing the executive power of the President of Sri Lanka, will be enjoyed by the next president who gets elected, which may be Sajith Premadasa.

As much as I look up to Gotabaya Rajapaksa to lead this country to greater heights of prosperity, I have no doubt that Sajith Premadasa too should be elected to be President of this country and that he has the same candour to take this country forward.

After all, whatever decision we make now is going to reflect on the future of this country.

I trust that people see that my decision will in no way hinder my political journey but open up more opportunities to serve the good people of this country.

November 1, 2020 byCharindra No Comments
Negotiations are currently ongoing with regard to all four originally planned monorail projects

April 11, 2021 byNews Admin No Comments
Despite the commencement of the construction of a 300 megawatt (MW) liquified natural gas (LNG) power plant at Kerawalapitiya at the beginning of last month, the relevant power purchasing agreement (P