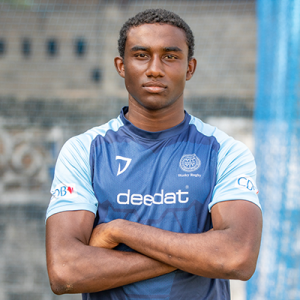 All eyes will be on the youngest member of the side, former Wesley College flanker Samuel Ogbebor

Sri Lankan Sevens rugby squad is scheduled to leave the island at 9.30 a.m. on board Emirates flight, bound to Dubai today (17).

After entering a bios-ecure bubble on the 2nd of November, the initial squad of the 20 members underwent training sessions under the guidance of Head Coach Nilufer Ibrahim and Sports Director Ben Gollings. One week back, the squad was reduced to 12 for the final team.

The newly appointed Skipper Adeesha Weerathunga has big responsibility on his shoulders to carry this young team on the field.

He can count on the experience of Sudharaka Dikkumbura and the two Silva brothers, Sachith and Iroshan, who will play a key role in the tournament.

The whole nation would be eagerly waiting to see the performance of the youngest member of the side, former Wesley College flanker Samuel Ogbebor.

Rizly Ilyas, President of Sri Lanka Rugby (SLR), speaking exclusively to the Morning Sports yesterday said, “The team is geared up for the occasion. Unfortunately we cannot allow any media personnel to capture the moments of their departure. But I urge the whole nation to get behind this young team and give their fullest support going into the tournament.”

Sri Lanka will play in the “group of death” alongside Japan, China, and the host nation UAE. The other group will consist of South Korea, Hong Kong, the Philippines, and Malaysia.

January 13, 2021 byRusiru Keppetipola No Comments
Out-of-the-playfield news, gossip, and snippets take centre-stage in this age, the age of the astonishing rise of social media. The Indian cricket captain getting his first child would not have been..

September 24, 2021 byRevatha No Comments
The 2nd edition of the LPL will run from 4-23 December