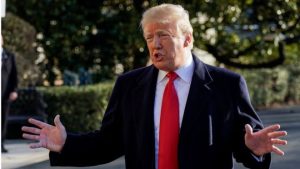 President Donald Trump has refused to compromise on his demand for a wall to be built on the Mexican border, the cause of a partial government shutdown.

He said he did not think he would have to reduce the $5.6bn (£4.4bn) in funds he was demanding and repeated a threat to declare a national emergency.

His new chief of staff Mick Mulvaney said earlier he expected the shutdown to “drag on a lot longer”.

Democrats refuse to back the funding, calling the wall “immoral”.

Talks to end the partial shutdown will resume later on Sunday, with the stalemate now in its third week, affecting some 800,000 federal workers.

The wall was one of Mr Trump’s key campaign pledges and he had said Mexico would pay for it, something Mexico has never agreed to. (BBC)

June 14, 2020 byTSM Web Desk No Comments
This is the first in a two-part series examining the escalating humanitarian crisis in Yemen.

May 18, 2019 byRandev No Comments
Australian Prime Minister Scott Morrison has thanked voters for re-electing his conservative coalition in a shock result at the federal polls.