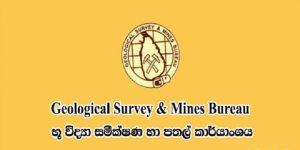 An internal investigation has been launched by the Geological Survey and Mines Bureau (GSMB) to identify corrupt officials attached to the Bureau, The Morning learnt.

The investigation is being conducted by the Breau’s Investigation Unit and it is in addition to the several other inquiries launched by the Commission to Investigate Allegations of Bribery or Corruption (CIABOC).

Speaking to The Morning, GSMB Director of Mineral Titling Hema Liyanarachchi said the investigations are currently going on against the allegations levelled against the alleged officials attached to the Bureau.

Holding a press conference on Wednesday (19), the GSMB Chairman rejected the allegations appeared in an article on an application on 17 August, which allegedly accused him of being involved in a corruption scandal amounting to Rs. 36 million per year.

September 22, 2020 bythemorningeditor1 liberty No Comments
The already delayed final report of the committee appointed to investigate the countrywide power failure on 17 August is to meet this week to evaluate its findings, according to Ministry of Power Spok